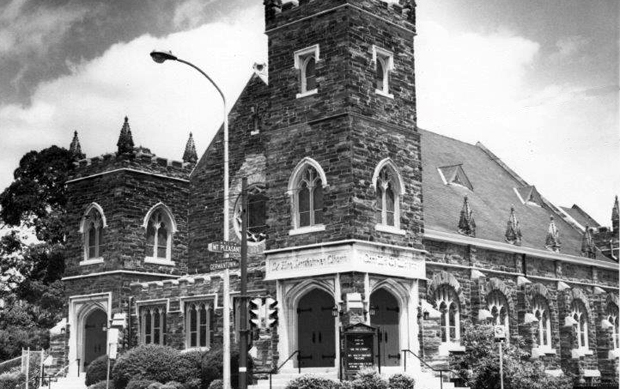 Mt. Airy Presbyterian Church (MAPC) began as a Sunday School in 1838 and later formed as a Mission Church to the old Market Square Presbyterian Church (Germantown) in a building rented on Mt. Airy Avenue beginning in 1879. The Presbytery of Philadelphia North organized this mission as the Mt. Airy Presbyterian Church on November 9, 1880. In 1883, the church moved to the corner of Germantown & Mt. Pleasant Avenues with the purchase of land and the building of a chapel. With the continued growth of the membership, a new building was erected in 1901. Later, during the peak period of membership, a Christian Education building was added in 1956, bringing MAPC’s three story facility to a total of 29,345 square feet. Fifty-six years later, even with renting out portions of the building, the membership was unable to sustain the maintenance of the aging property. The entire premises was sold in 2013 and MAPC has remained in house, in the Sanctuary section, as renters.

In 1883, there were 24 members. Church membership peaked in 1947 with 1,134 members. Membership began to decline during the Post WWII period. By 1960, membership declined to 781. The trend, affecting most churches these days, continued so that by the turn of the century the membership numbered 240. Today, 2017, 51 members.

MAPC is located at a major intersection in the downtown Mt. Airy section of Philadelphia. In the 1940s and ‘50s the neighborhoods of Philadelphia began to change as African-Americans and other minorities began to move into previously white neighborhoods. This was a difficult time for most neighborhoods, some of which saw their racial makeup invert completely in a span of 10 years. Often this was caused by aggressive and unethical tactics by real estate agents which led to panic-selling. In Mt. Airy there was a concerted effort by the city’s Human Relations Commission and four local clergy to defeat those tactics. They educated the neighborhood about racial integration and democratic principles. Through the 1960s and ‘70s, the issue of race, both in Mt. Airy and MAPC was an important one. While overall membership was in decline, the congregation became more diverse and reflective of the community and this continues to be a hallmark of MAPC and other churches in the surrounding neighborhoods.

Over the course of years, the congregation has strived to serve and educate, support missionaries, welcome theologians from abroad studying locally and ministering in the community with many community based events. In the ‘40s and ‘50s there was an active sewing guild producing items for those in need, basketball leagues and also a massive choir. In the ‘60s and ‘70s there were excellent Christian Education programs, youth groups and VBS. In the ‘80s and ‘90s MAPC assisted the Northwest Philadelphia Interfaith Housing Network in ministering to the homeless and helped fight food insecurity. In 1989, three women, two of whom were MAPC members, established Childspace, a five-star daycare center that provided daycare services for approximately 100 preschool through fourth grade children from the community before, during and after school hours and the WIC office served 500 to 2,000 community members monthly. In 2011, MAPC partnered with The Philadelphia Project, providing space and a base of operations for mission outreach in the community.

These days we find ourselves looking for a new Pastor.