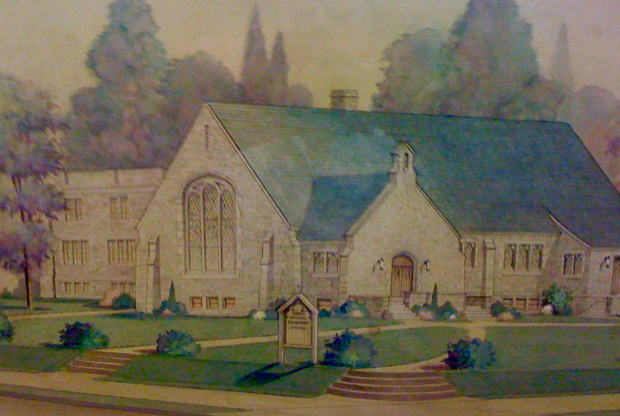 The UPNA Presbytery of Philadelphia purchased a lot in the newly developing area of Mayfair in Northeast Philadelphia and began a mission there in March, 1929. Seven months later, on October 24, 1929, the Presbytery organized the Mayfair United Presbyterian Church at Tudor, Bleigh and Crispin Streets.

As Mayfair developed, this church grew in membership to a high of 603 by 1960. The Sunday school reached its peak of 502 in 1940.  After 1960 the church felt the pressure of the surrounding heavily Roman Catholic community, and nearby Jewish neighborhoods. The 1970 membership of 450 was still reassuring, but the Sunday school enrollment of 109 suggested further decline ahead. That's exactly what happened. Membership went down to 248 in 1980 and to 152 in 1990.  There were only 30 pupils in the Sunday school that year.  For the most part as Presbyterians moved from Mayfair to other places, their replacements were either Roman Catholic, Jewish or members of other Protestant groups. In 1990 the Mayfair United and Holmesburg churches, a mile apart, began several joint programs, using their leadership and facilities to extend their outreach in both neighborhoods.

In 2009, after several years of joint programming and sharing of staff, the First Presbyterian Church of Holmesburg closed and several of their members joined the Mayfair Presbyterian congregation.  In 2009 Mayfair agreed to have a daycare use our facilities which greatly helped with the expenses of the church.  Soon there were 45-60 children from infancy to eighth grade attending the daycare.  After six years, the existing daycare closed due to difficulties with inspections. After much prayer and hard work, a new daycare has opened in 2017 under new leadership which we hope will be of service to the families of the community for years to come.  For the past two years, a small Lutheran congregation named St. Anthony’s has used our sanctuary for Sunday services.  Like Mayfair, theirs is a small faithful gathering of 15-20 members.  Although we do not have Sunday school, we have been blessed to have the same pastor for six years who has also enriched us with a Bible study of the Holy Land.  We have a small choir of six devoted women led by our choir director/organist.  The Martha circle is a group of faithful women who meet monthly for Bible study, prayer, mission work, and fellowship.  The session is planning to lead the congregation in some local outreach projects this year.