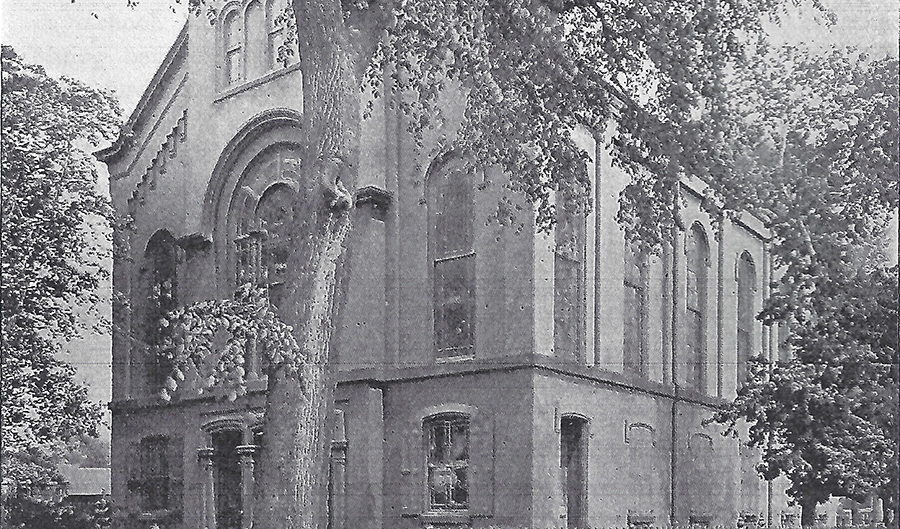 The Frankford Church was originally a German Reformed congregation, planted by Market Square Church and served by the same German pastor. The German founders were joined by a group of Swiss Calvinists from Basel, including Hans Georg Gerster, who changed his name to George Castor.  Castor was the son of a single mother and a boyfriend who promised marriage, then abandoned her and refused to acknowledge his child.  Without a father to admit paternity, no Swiss canton would give Castor citizenship.  Yet there was one advantage to being a nobody, an un-citizen, an “illegal”, so to speak—he didn’t have to pay a tax to leave the canton, to reimburse them for the loss of his labor.

In 1736 the 26 year old Castor and his family endured a 5 month voyage to Philadelphia to seek his fortune.  The British promptly confiscated all their property as illegal foreign imports.  He started as a day laborer, then perfected the trade of weaving linen from flax, and within 30 years became a wealthy entrepreneur, thanks to very low taxes.  In 1766 Castor used his wealth to buy a 200 acre farm and homestead for his wife and 8 children on a nearby country lane later named Castor Ave. Castor helped draft the charter for the “Old Dutch Church”, buy the land, set up the graveyard and build the first meeting house in 1770.

During the American Revolution, the church building was used as a prison for Hessian soldiers seized by General Washington’s troops at the Battle of Trenton on Christmas Day in 1776.   After 32 years of partnership with Market Square, Frankford members discontinued regular German services, began to worship occasionally in English, and in 1802 petitioned our Presbytery for pulpit supply from Rev. Jacob J. Janeway and others. In 1807 their leaders appealed to the Presbytery of Philadelphia to receive them under its care.  Present at the December 8th 1807 meeting of the Presbytery were the Revs. William Tennent, Ashbel Green, Archibald Alexander, Jacob Janeway, William Latta, and George C. Potts. Among Frankford’s first members were the parents of Stephen Decatur, the Naval war hero from the War of the Barbary Pirates.

Frankford has been blessed with long pastorates—from 1849 to 1946 it had only 2 pastors:  Dr. Thomas Murphy, 46 years; and Dr. John Laird, 51 years.  Eight Presbyterian churches came out of this ministry: 1837, Bridesburg; 1853, Holmesburg; 1877, Ann Carmichael; 1886, Disston Memorial; 1888, Wissinoming and Lawndale; 1898 Olney, First; and 1934, Glading Memorial.  The manse was built in 1844, the present church in 1860, the organ installed in 1870.  Frankford started one of the first Sunday Schools in the city in 1815.  Sunday School enrollment ranged from 600 to 700 from 1910 to 1940 and membership peaked at 1,034 in 1930.  In 1910 Dr. Laird established the endowment fund which continues to support our ministry.  After World War II the church experienced the full force of change in Frankford.  When Dr. Laird retired, some Frankford members transferred to churches near where they lived in the suburbs, but some still returned from the suburbs to support the church faithfully under the beloved Dr. Carlton J. Sieber, pastor from 1955 to 1988, who had a shepherd’s heart, and who was a mentor to our current pastor. Some left after Dr. Sieber’s retirement in 1988, and death and physical incapacity further reduced the membership to 79 by 1990, to 33 in 2016.  The church’s location in the heart of the Frankford business district, once an attraction, became a limiting factor on outreach because of the decay and deterioration of the area.

Pastor John Sweet began his ministry as part-time Supply Pastor in 2005, and steered the church through the PCUSA’s constitutional turmoil of 2006-2014.  When Union Tabernacle Church in Kensington closed its doors 5 years ago, they joined Frankford as a group, brought us new talents and music, and our hearts have grown together.  A Muslim-Christian dialogue has evolved in our midst.  We strive to be a faithful remnant, committed to keep the Gospel beacon shining and our Mission outpost active on this street corner, to stay in the PCUSA and to be faithful to our CORE principles, Catholic, Orthodox, Reformed and Evangelical, to be true to the authority & inspiration of the Scriptures, and to be followers of the only Lord and Savior Jesus Christ, Incarnate, Crucified, Risen, Ascended, Reigning, and Coming Again!