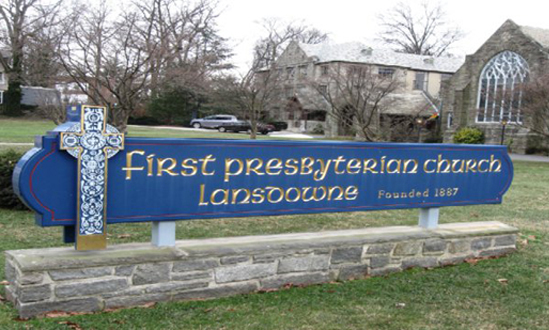 Back in the early 1880's, Lansdowne was a small village on the outskirts of Philadelphia. Other than the Friends meeting, no formal churches existed in the village. The Reverend James Roberts, pastor of the Presbyterian Church of Darby met with a new resident, Joseph Davis, and proposed that they start a Sunday school in Lansdowne.

On March 15, 1887, the provisional trustees of the church accepted a gift of an acre of ground for a church site, donated by Mr. and Mrs. W. Albert Johnson. On May 26, 1887, a Presbytery committee officially organized the Lansdowne church and designated the first pulpit pastor. The First Presbyterian Church of Lansdowne was incorporated on June 6th, 1887, and the first congregational meeting was held on June 9th.

By the turn of the century, the membership had grown significantly and the congregation outgrew the church building. In 1910, the congregation approved plans for building a new church. On May 26th, 1916, on the 39th anniversary of organizing the church, members met for the first time in their new sanctuary, which remains in use today at the corner of Greenwood and Lansdowne Avenues.

While once the largest congregation in the area, the First Presbyterian Church of Lansdowne has remained steadfast in spite of social and economic challenges.

Today, the church continues to minister to the needs of the local and worldwide communities through a mission emphasis. The church structure houses the local food pantry and a repurpose shop whose sole purpose is to provide items to those in need and use the profits of the shop for mission work, both at home and abroad.  Our Missions outreach includes Philabundance, Baby Manna, Heifer Project, Backpacks for Kids, Mitten Trees in the winter, and support for the local women's shelter.  Each year we focus on the program "The Church Has Left The Building" where we bring the word of Christ out to our community.  Sunday School for all ages through adult classes run throughout the fall - spring year with a summer recess.  The PresbyPlayers band together to provide meaningful skits and drama during worship and evening entertainment with fun filled humorous theater productions.  The music program includes the children's Sunday School Singers, the adult Chancel Choir, the Bell Choir, and a special small group, First Light.  The youth group is growing stronger each year and a solid bond of friendship has evolved as the young people discuss their faith and current issues that they face.  Our diverse congregation comes from around the globe including Liberia, Cameroon, and Ghana and is inclusive of all sexual orientations.  We are an open and welcoming community of believers and all are greeted with the peace of Christ.