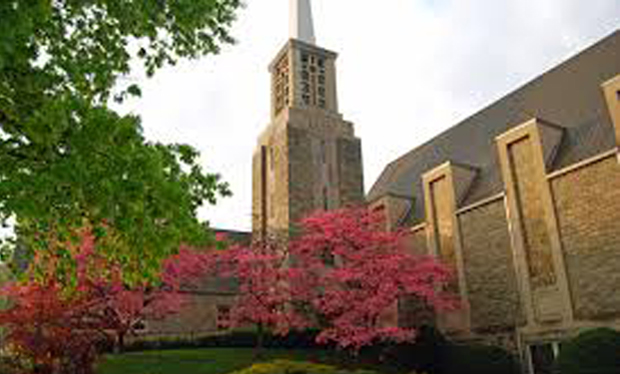 “I don’t see how I can live in a town that lacks a Presbyterian Church.”  Those were the words of Jacob Yost’s fiancée, Mary.  Yost was a retiring Congressman from Pottstown, but he was Lutheran.  She was a young widow who met Jacob in Washington, D.C., and a staunch Presbyterian originally from Troy, New York.  She accepted Jacob’s proposal for marriage, but her remark would prove to be the catalyst for the organization of the new church.  Jacob joined Mary in helping to organize a Presbyterian church along with eight other pioneering individuals in 1848.  Among the supporters of the new church’s first building campaign was President James Buchanan, a Presbyterian and friend of Jacob Yost.

During the church’s first half-century, it shared a close relationship with The Hill School, which had been founded by a Presbyterian minister.  The first prominent headmaster of the school, Matthew Meigs, was an elder at First Presbyterian Church and a leader in the denomination.  In the days before the school built its own chapel, the students attended the church.  Mr. Meigs told a friend that he felt responsible to recruit a pastor for the church who would make the services “interesting, stimulating, and inspiring.”  Not only did Mr. Meigs help to recruit the new minister, Rev. Henry Dyckman, he personally paid part of his salary.  The church and the Hill School benefitted as the church doubled in size under Rev. Dyckman’s tenure.

The pastor who has served the longest in First Presbyterian’s history was a Welshman, Rev. Arthur Simpson, who served from 1915 to 1939.  He was most beloved, unlike some of his ideas.  His introduction of a live shooting range in the basement of the church for the Boy Scouts was brought to a quick end.

The growing church needed to expand, but it could not do so in its original downtown location.  In 1962, the church moved a mile north and dedicated its new sanctuary and building.  The church reached its peak membership in the early 1970s before facing a membership decline that paralleled Pottstown’s industrial decline.  But in 1993 the church completed a new addition, and the church has been slowly growing since the early 1990s.

Hallmarks of First Presbyterian’s ministry through the years have been its strong music program, a vibrant children and youth ministry, and active local, national, and global outreach ministries.  Our mission statement describes our vision and directs our common life: “four generations of Christians seeking together to grow deeper in Christ to reach farther in love.”  We are happy to send many children and youth each summer to Camp Kirkwood so they can grow deeper in Christ.  Our middle school youth reach out in love locally through summer Mission Mornings.  Our senior high youth recently completed their 22nd summer workcamp, working this time to keep elderly folks in Lynchburg, Virginia warm, safe, and dry in their homes.  Since 2005, eleven adult mission crews have gone forth to various PDA sites around the country, and other adult/college teams have brought clean water to eight villages in Honduras in partnership with Living Waters for the World.