Claude Williams and the Proletarian Church 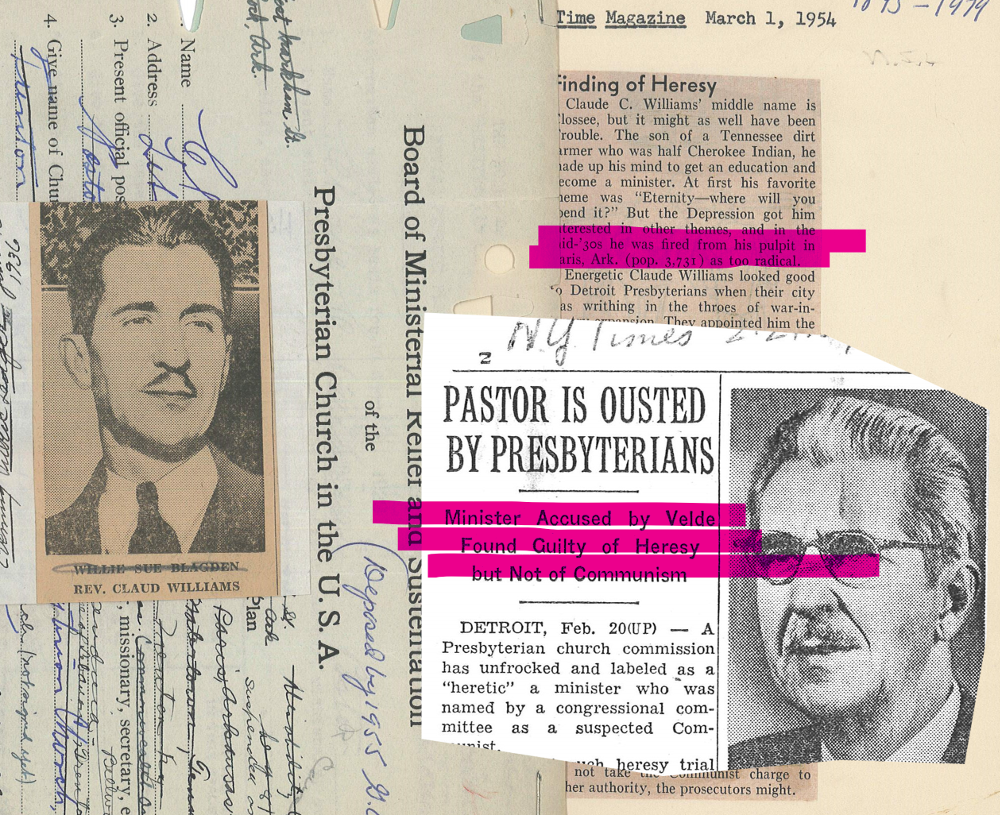 In her book A Singing Army: Zilphia Horton and the Highlander Folk School, Kim Ruehl traces the life of Zilphia Johnson Horton from the small town of Paris, Arkansas to Monteagle, Tennessee where she and her husband, Myles Horton, the founder of the Highlander Folk School, organized and led training courses that during the 1930s, 1940s, and 1950s addressed issues related to labor rights and civil rights. The story of that school is interesting in and of itself, and you may have been introduced to it by Bill Moyers' documentary, Radical Hillbilly.

A turning point for Williams came when he read Harry Emerson Fosdick’s book, Modern Use of the Bible, in which Fosdick de-emphasizes reading the Bible literally and, instead, moves more to a social gospel reading of Scripture. While in Tennessee, Williams attended classes at the Vanderbilt School of Religion which reinforced this newfound perspective on the gospel.

In 1930, Williams and his wife, Joyce, moved to Paris, Arkansas -- a community of miners, sharecroppers, and a few Black families. There was also a significant Ku Klux Klan presence there. Zilphia Johnson’s parents could not agree on a church. Her father worked on the management side of a local coal-mining company. Sensing her restlessness with life in Paris, one day her father suggested that she attend one of Williams’ “philosophy club” gatherings. It changed her life.

"Preacher Williams is not on trial. For most of us the Church as an institution is standing trial. If it fails to stand by Claude C. Williams we will simply live without it."

Williams came to the Presbyterian Church (Paris, Ark.) with the understanding that he would be permitted to organize an experimental church among youth and laborers. With support of session and the Paris church's trustees, in 1932 Williams organized the Proletarian Church and Labor Temple, and held outdoor meetings, classes, and dances. This work grew the Paris congregation to about 75 members, including Black families. After a year session moved to dissolve the pastoral relationship, citing Williams for hosting dances in his home.

Williams appealed to the Synod of Arkansas arguing that the session was chiefly comprised of petty local tyrants who hated Black people, workers, and young people: "The session because of the provincialism, the stake in the present order of things, the racial attitude, the pseudo-patriotism, the religious literalism of its members was and is prejudiced against the appellant, his activities, and against all who cooperated or sympathized with his views or activities."

One of his supporters, Hoyle Houser, wrote to the Synod: "Preacher Williams is not on trial. For most of us the Church as an institution is standing trial. If it fails to stand by Claude C. Williams we will simply live without it."

Williams was removed after four years in Paris, and served a church in Fort Smith, Arkansas. There he was arrested for organizing a hunger march for unemployed workers, fined $100, served 90 days in jail, and tried for heresy by his presbytery. In 1936 he founded the New Era School for Social Action and Prophetic Religion. That same year he was severely beaten by five sheriff’s deputies while he was on his way to Memphis to prepare the funeral for a Black sharecropper who had been beaten to death. He was not allowed to continue his trip to Memphis.

In 1937 Williams was appointed director of Commonwealth College in Mena, Arkansas where he remained for two years, resigning in 1939 after being accused of having Communist sympathies. In 1940 he moved to Birmingham, Alabama where, blending his Christian piety with social activism, he organized the People’s Institute of Applied Religion (PIAR).

In 1942 Williams was invited by Detroit Presbytery to become an “industrial chaplain” to auto workers, unions, and the Black community. Accused of engaging in Communist activities, he was fired by the presbytery in 1945. He returned to Birmingham where in 1953 he was again accused of being a Communist by the House Un-American Activities Committee. Meanwhile, the Presbytery of Detroit tried and convicted him of heresy. He was defrocked as a minister and was not reinstated until 1965.

Williams continued to be active in the civil rights movement in the 1950s and 1960s in Birmingham. Williams and his wife lived south of the city in a trailer until their passing -- hers in 1976 and his three years later in 1979. Shortly before he died, he delivered his personal records, spanning the Paris church incident, his work with the Southern Tenant Farmers Union (STFU), and his automotive industry work, to the Reuther Library at Wayne State University in Detroit.

"Church work with the working class" in Pearl

Joshua Youngblood, "Realistic Religion and Radical Prophets: The STFU, the Social Gospel, and the American Left in the 1930s," 2004.

Presbyterian Historical Society of the Southwest