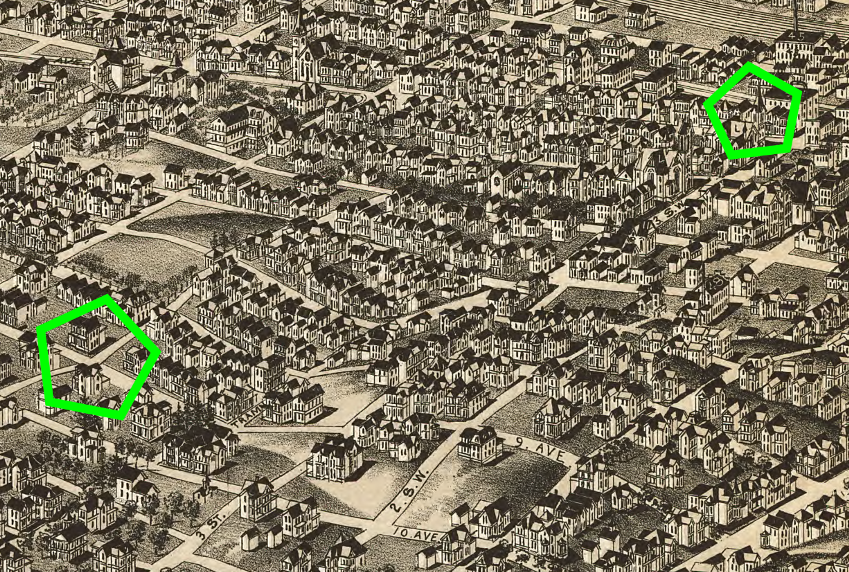 In September of 1893, in Roanoke, Virginia, a Black man named Thomas Smith was accused of assaulting and robbing a white woman, run down by a lynch mob, and hanged and mutilated from a hickory tree at the corner of Mountain Avenue and Franklin Road. Following the lynching, the pastor of First Presbyterian Church, William Creighton Campbell, pleaded with rioters to disperse and to permit the deposition of Smith's body. They refused, and the clerk of session of First Presbyterian Church, Robert B. Moorman, who was president of the Roanoke Water Power and Land Company, ordered a horse drawn cart to carry the body. He then led the rioters to the Roanoke River where the body was dismembered and burned. 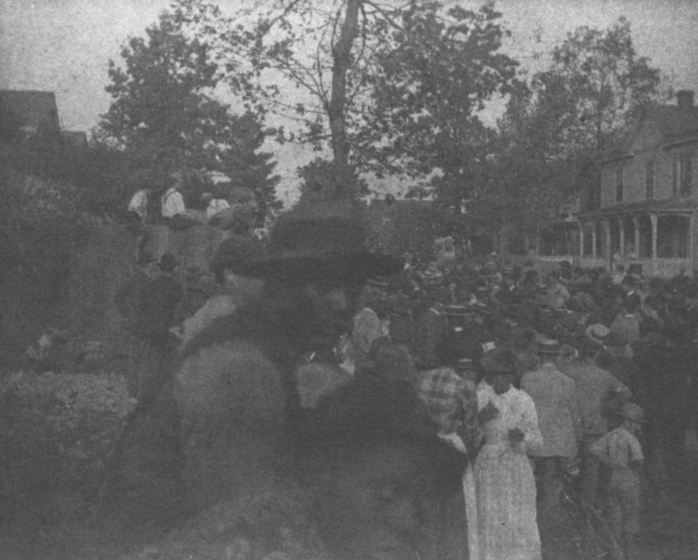 A crowd of onlookers at the hickory tree, after the lynching of Thomas Smith

Roanoke at the time was less than a decade old, a railroad boomtown powered by investors from Philadelphia and Pittsburgh, seeking access to the coalfields of southern West Virginia and eastern Kentucky. Taking the moribund Shenandoah Railroad and a bankrupt east-west route they renamed the Norfolk and Western, the investors plotted a city at the junction of the two, on a village of a few hundred people called Big Lick. Incorporated in 1884, the new town, its salt licks filled in, Roanoke drew swarms of rural Virginians to its machine works, factories, and railyards, booming to a population around 25,000 by 1890. About a third of the newcomers were Black. The majority of the Black population was segregated into Gainsboro, a village north of the railroad tracks. 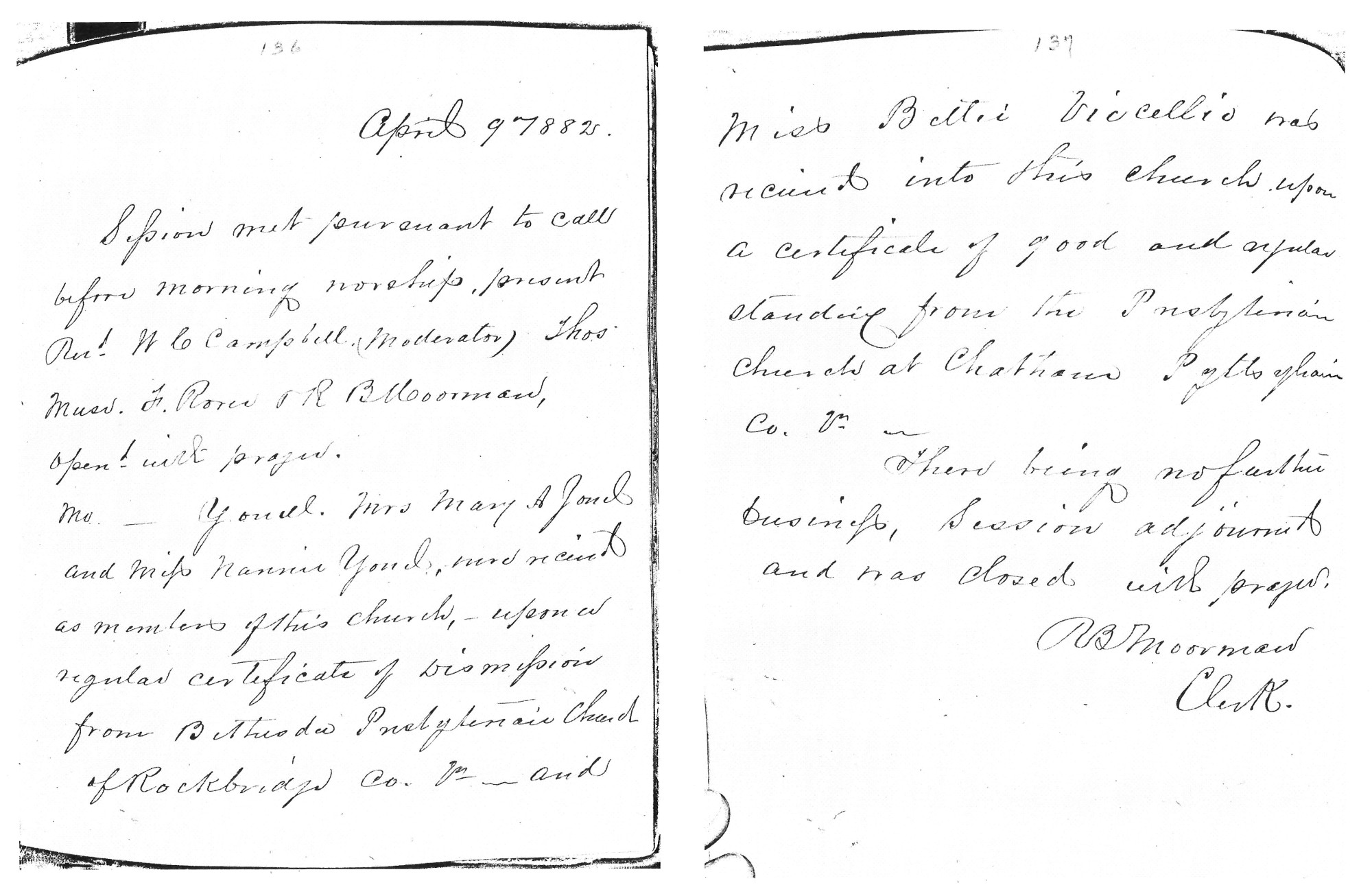 South of the railroad tracks was the wood-frame edifice of First Presbyterian Church. Organized in 1851 within the Presbytery of Montgomery as Big Lick Presbyterian Church, the congregation's first home was a wooden building stretched across three lots in Gainsboro. Following the railroad boom, the church moved to Church Avenue and Roanoke Street in 1875. The site was donated by Ferdinand Rorer, a prominent businessman. A brick church would go up on the site before 1903, a sharp contrast to what members called their old church "off in the woods." William Creighton Campbell took the pulpit there in 1881 and remained there until his death in 1936. 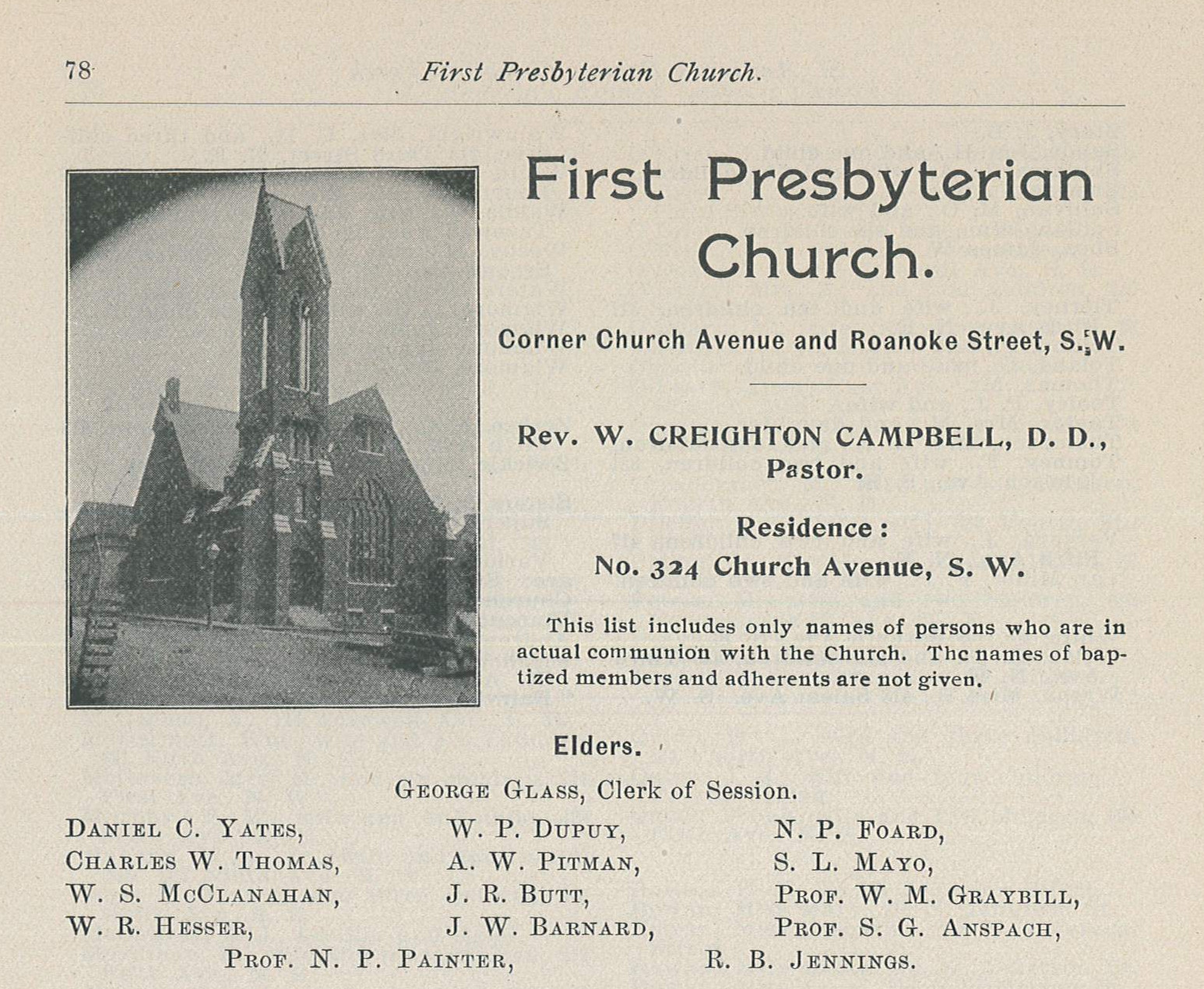 The brick church, from a 1903 city directory of churches

Virginians have historically prided themselves on maintaining tranquil race relations, regardless of the truth. Roanokers lionize Booker T. Washington, the teacher Lucy Addison, and the physician I.D. Burrell as exemplary figures, and we compare our society favorably to the nigh-hourly murders and endemic stochastic terror whites visited upon Black people elsewhere in the South.

What's closer to the truth is that white supremacy is endemic to America. Every town and city in our topography was the site of a lynching. In 1892, William Lavender was lynched from the Wasena bridge by a mob retaliating after a white girl claimed a "very black man" wearing rubber boots accosted her. Lavender's murder was a case of misidentification and mass hysteria. Police had identified a possible assailant, but any Black man wearing rubber boots was a target.

Thomas Smith was likely another case of mistaken identity. A Mrs. Gibson, selling produce in the downtown farmers' market, reported being robbed by a Black man in a slouch hat. Smith was pulled off of an eastbound train, dragged before the witness, and hazily identified by his hat. By the time he was taken to the city lockup, word had spread, the reported robbery had expanded to rape and murder, and by that evening a crowd of 5000 people had gathered outside the jail, separated from Smith by private Norfolk and Western policemen, and the Roanoke Light Infantry Blues. The crowd, convinced that the amateur militia and railroad goons would not fire on white men, threw rocks and bottles and surged toward the line. The police fired into the crowd repeatedly, killing eight. Worshippers at the Wednesday night service in the Methodist Church across the street hid beneath their pews as bullets and shrapnel cascaded in.

Presbyterians whipped up enmity against Black barkeeps in 1891, tried to restrain the 1893 lynch mob, and ultimately led that mob down to the river.

Mayor Trout was shot in the foot while inside the jail, and in hysterics, was whisked out of downtown. The police line disbanded. Smith was hidden in the back of a cart and wheeled out of the jail. Rioters, unable to find him, "sought solace in saloons," until, for reasons passing understanding, the police brought Smith back to the jail, about 3 AM. The convoy was stopped by about a dozen, presumably drunken and wounded, men, and diverted to the site on Mountain Avenue. Smith was hanged, riddled with bullets, and in the morning had a sign hung on his body reading "Mayor Trout's friend."

Leading up to the lynchings of 1892 and 1893, religious leaders in the city had embarked on prohibition and anti-vice crusades. William Campbell of First Presbyterian himself decried the debauched city “Roanoke in its morals for a time sadly deteriorated,” blaming the deterioration on “barrooms with their baneful influence” and on the arrival of “dangerous” people “inclined to do as they pleased in a new place.” As in Tulsa, anti-Black judicial and extrajudicial violence occured in the shadow of Progressive-era crusades against turpitude and for moral purity.

In 1890 and 1891 a series of police raids were visited on the Black saloons on Railroad Street, in part whipped up by respectable preachers like Campbell, who warned from the pulpit that Roanoke was "in the midst of a carnival of crime." The goal was annihilation, not repair of these people or places, and public rhetoric matched it. A smallpox outbreak around Gainsboro the prior decade had cemented the idea of pandemic disease being a feature of licentious Negro life. After one raid, the Roanoke Times wrote of bars so “unspeakably filthy and pestilential” where one “could almost see the grim form of disease rising from the place, and with his skeleton-like fingers spreading the black mantle of disease over the city.” By 1893, conditions for widespread violence against Black Roanokers were in place. 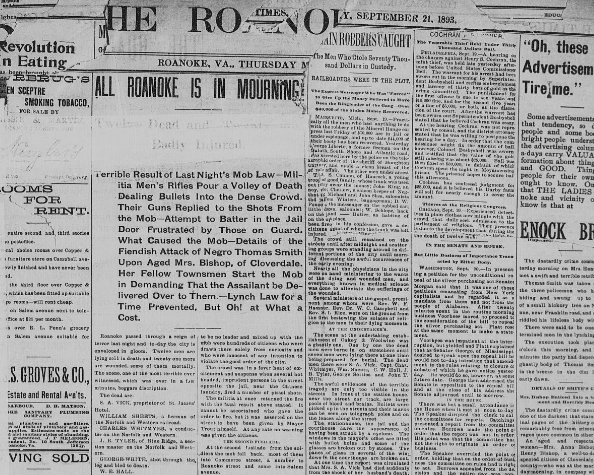 "All Roanoke Is In Mourning," the Roanoke Times, September 21, 1893 via Library of Congress

However, horrified by the outcome of the white riot, and tending the wounds of a working class decimated by the Panic of 1893, white Roanokers stepped back from the brink of racial violence. Black Roanokers, in one historian's phrase simply, "kept a low profile." This was literally true of Roanoke's Black Presbyterians, who worshipped in the basement of First Presbyterian Church, part of the same diverse body whose members had whipped up enmity against Black barkeeps in 1891, tried to restrain the 1893 lynch mob, and finally led that mob down to the river. 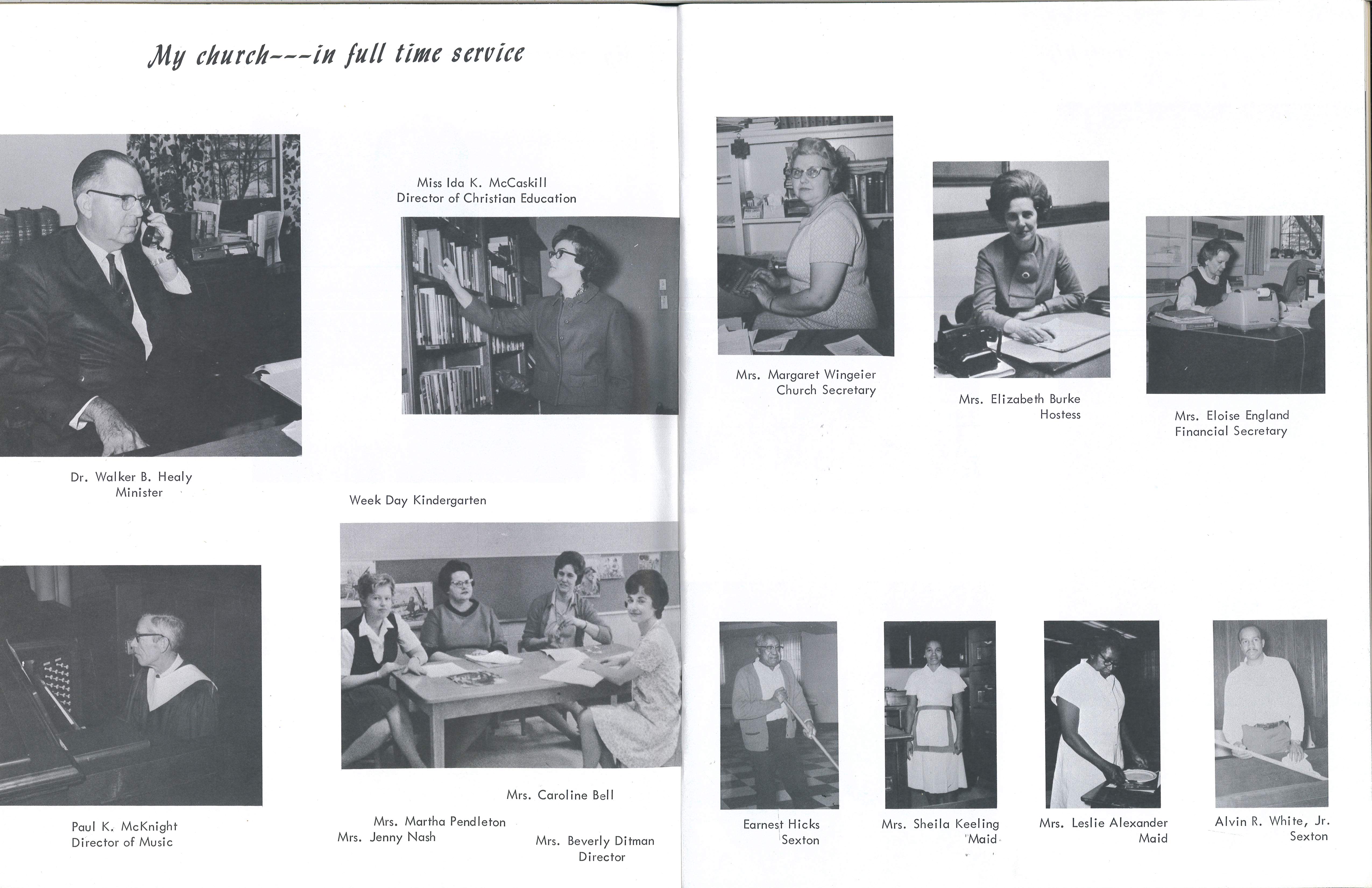 In 1898, the Black portion of the congregation raised money for a building in Gainsboro and established Fifth Avenue Presbyterian Church. Lucy Addison was a member, and taught Sunday School there for forty years.