Newspaper publisher, teacher, minister, President of the United States of America. These are just a few of the occupations held by Presbyterians during the Civil War. Their experiences and stories, some more well-known than others, are shared here.

Much has been written about Abraham Lincoln’s religiosity. His Christian attitude drew admiration from prominent figures in many religious traditions. Though his beliefs were generally nonsectarian, and he was never formally attached to any church, the Lincoln family attended the First Presbyterian Church in Springfield, Illinois, where Lincoln served as a trustee beginning in 1853. 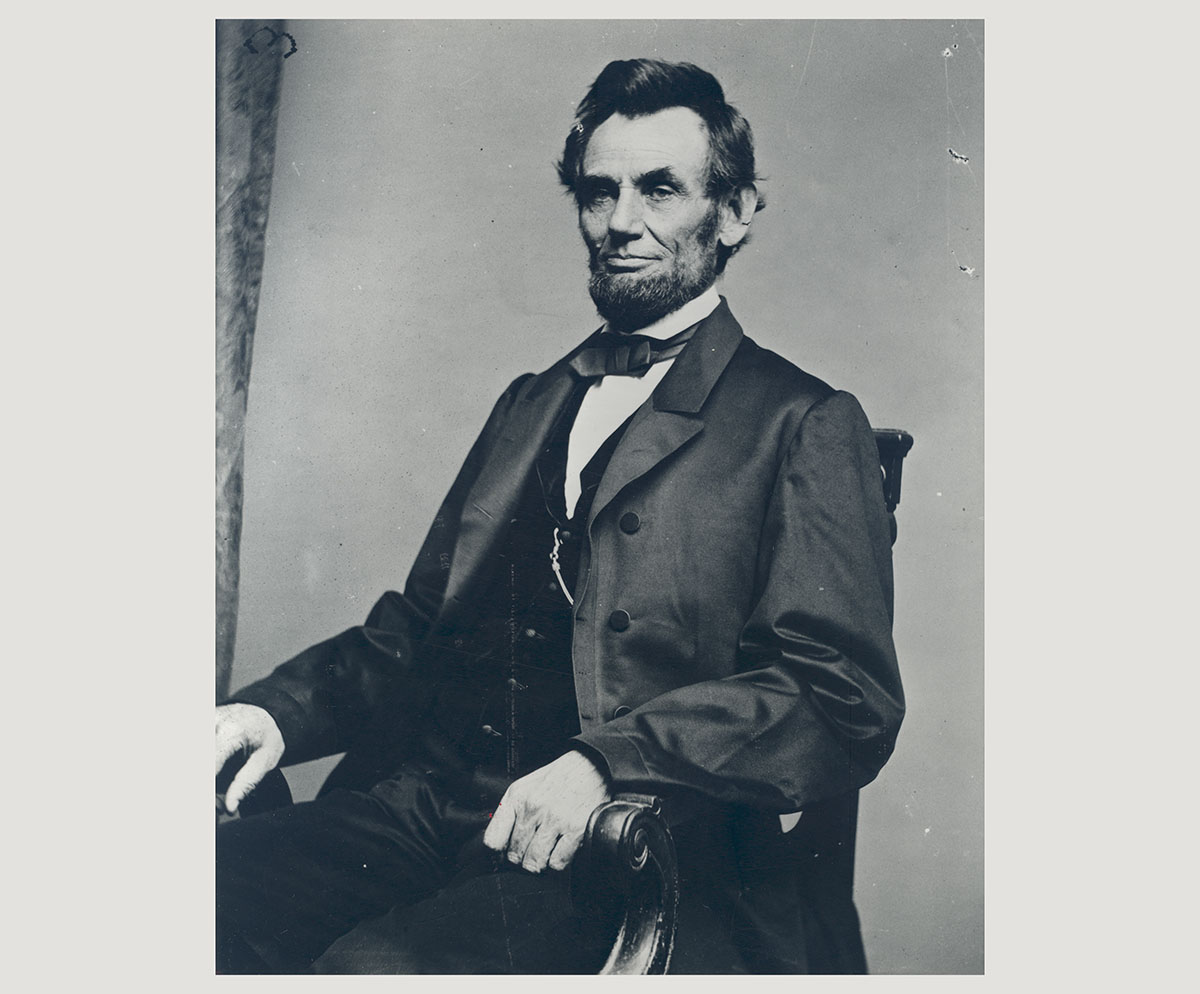 Many sermons and orations marked the occasion of President Lincoln’s death on April 14, 1865. Among the most famous is the sermon delivered at the funeral, held at the Executive Mansion in Washington, D.C. on the nineteenth of April. Rev. Phineas Gurley (1816-1868) had been the Lincoln family’s pastor for four years at the New York Avenue Presbyterian Church in Washington. The sermon reveals how Lincoln’s pastor viewed the president’s place in history. "Where reason fails, with all her powers, There faith prevails, and love adores," Gurley states in his oration. 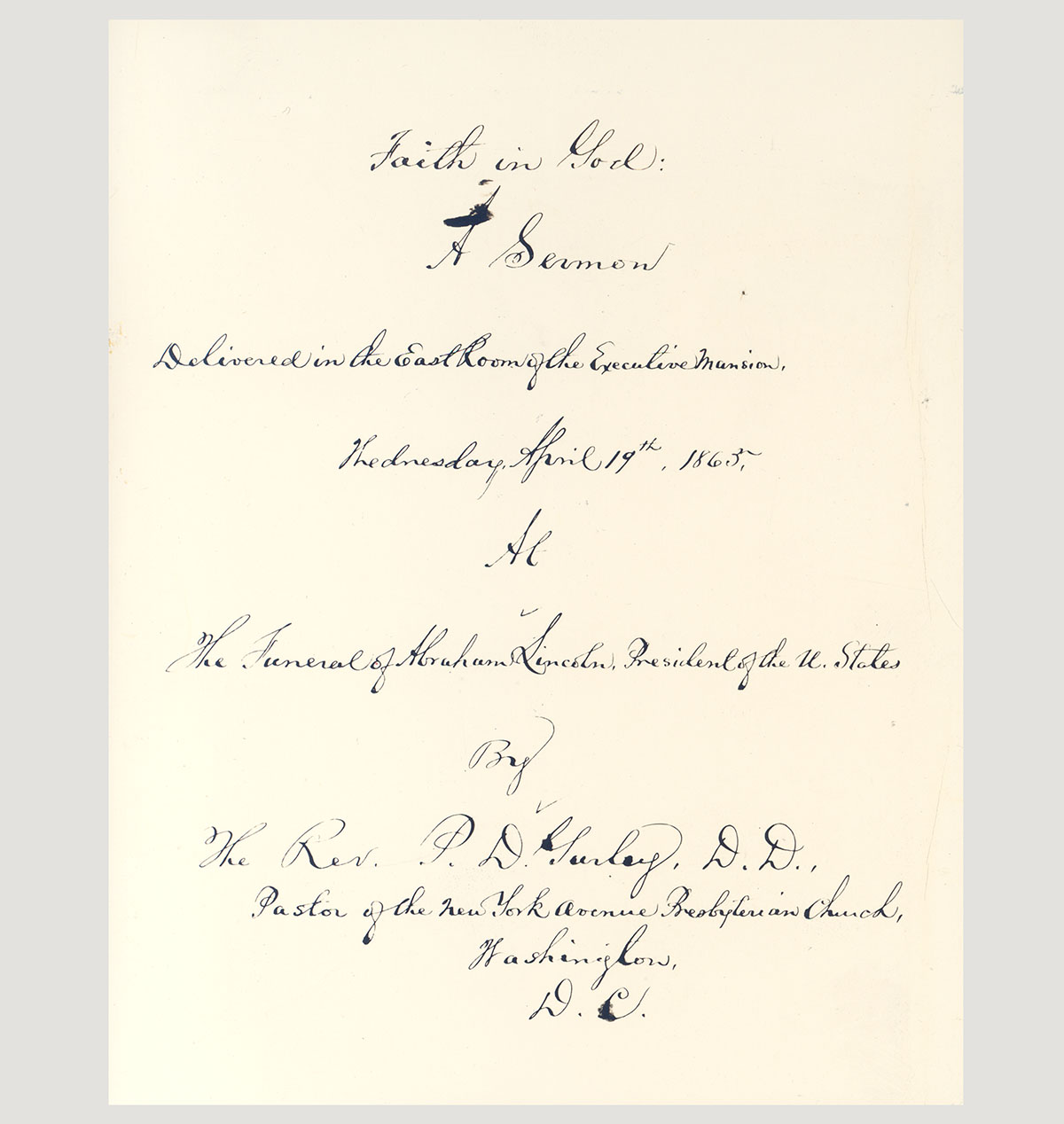 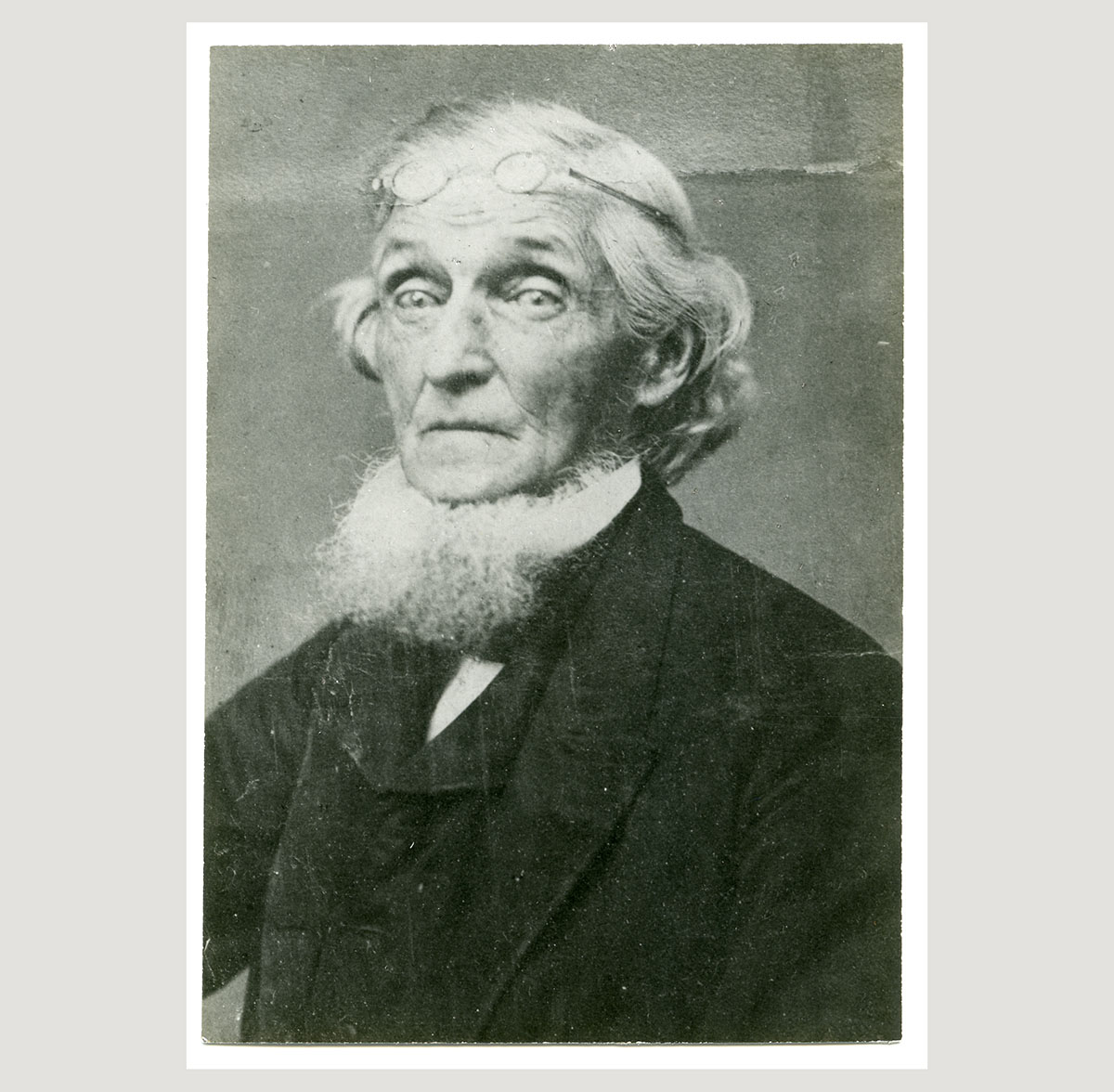 Amasa Converse founded the Christian Observer in 1840. After the Civil War, it became the flagship newspaper of the Presbyterian Church in the United States. In his unfinished autobiography, Converse recorded his view on the volatile debates over slavery, which had split the Presbyterian church before the war:

“…In 1854 and afterwards while…the Christian Observer was pursuing the even tenor of its way, and gaining many new patrons, the abolition party was not at rest.
The Church had repeatedly recorded its judgment on the subject of slavery: but nothing which the Church could say in its General Assembly seemed to quiet the agitators, the demand was reiterated by that party and continued from year to year for more action.
At length in the New School Assembly of 1857, the blow was struck which severed the commissioners of the Southern from all connection with the Church in the Northern New School Assembly…” 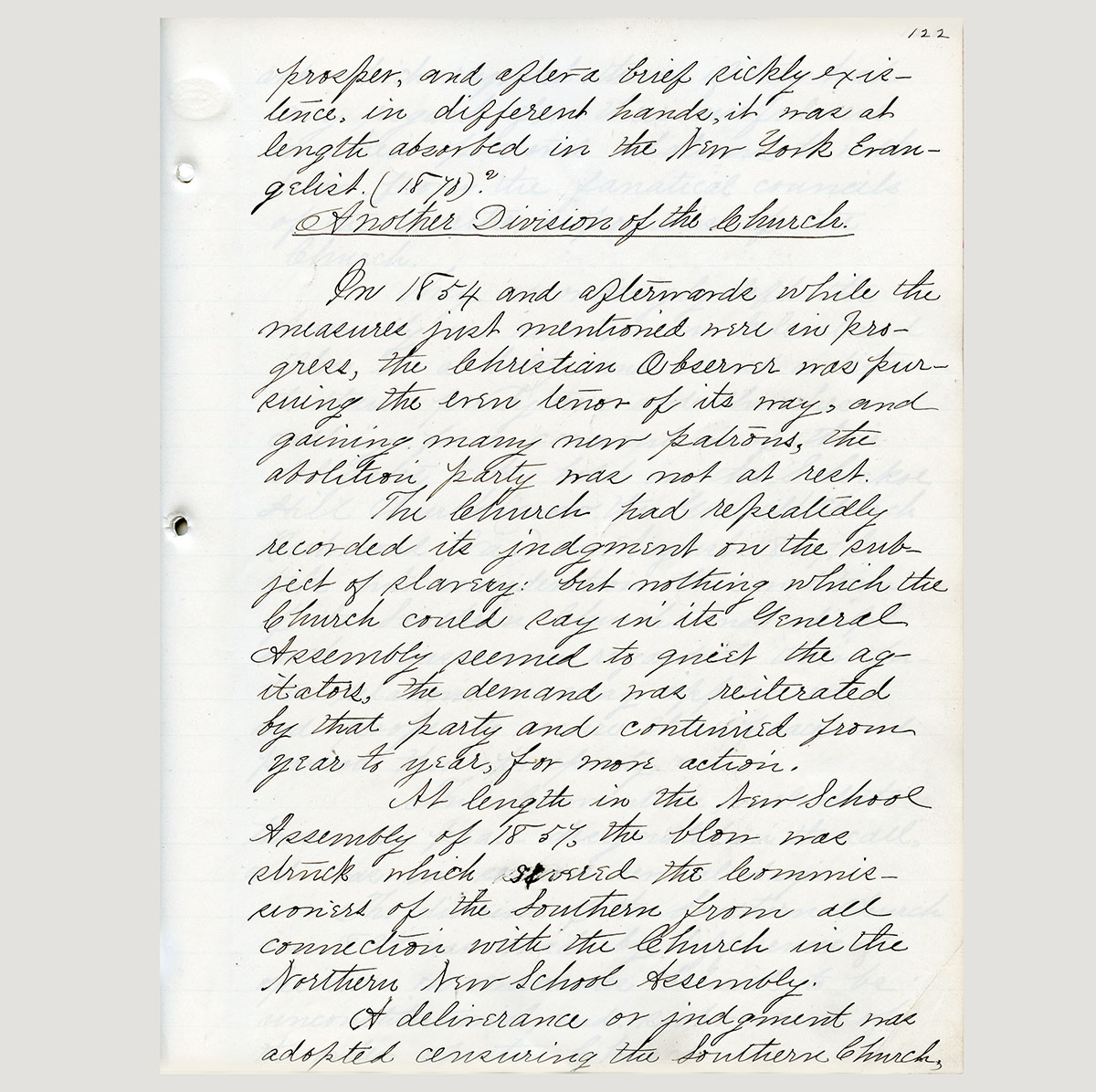 Fortress Monroe, Virginia remained under Union control throughout the Civil War and housed two military hospitals, Hampton and Chesapeake. Rev. Edward Payson Roe (1838-1888) served as chaplain of Hampton Hospital alongside his wife, Anna Sands Roe. Together they gave spiritual counseling, provided supplies, read and talked to wounded soldiers, and even campaigned for the installation of a hospital library. 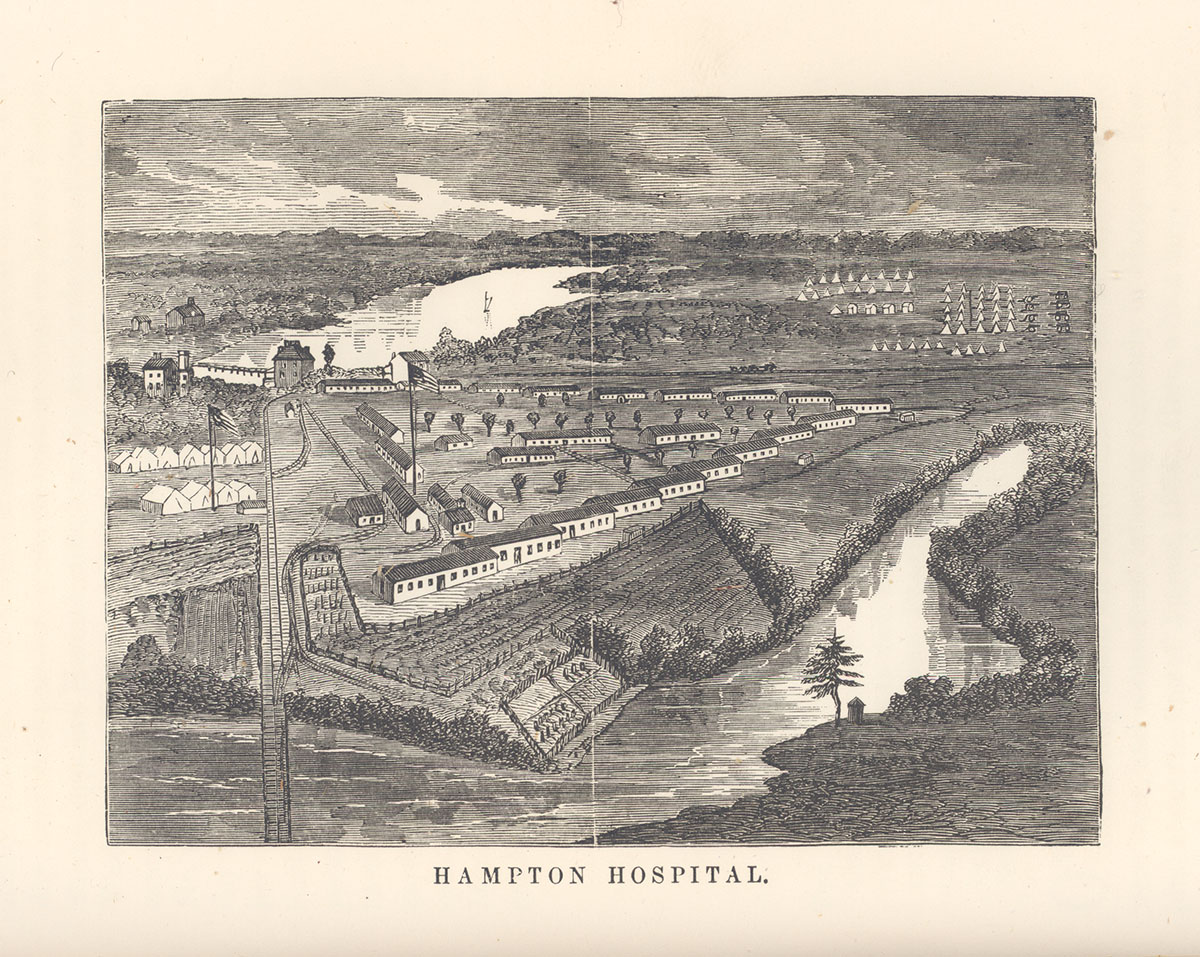 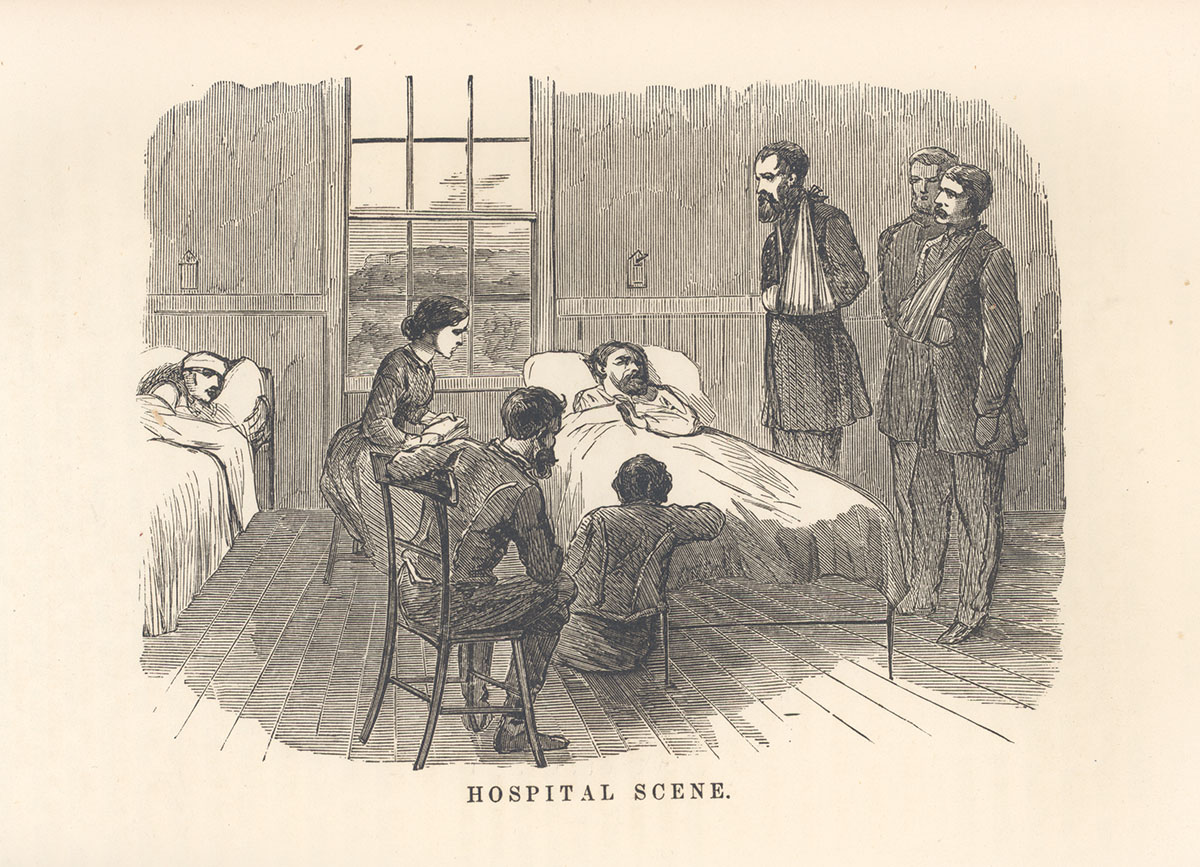 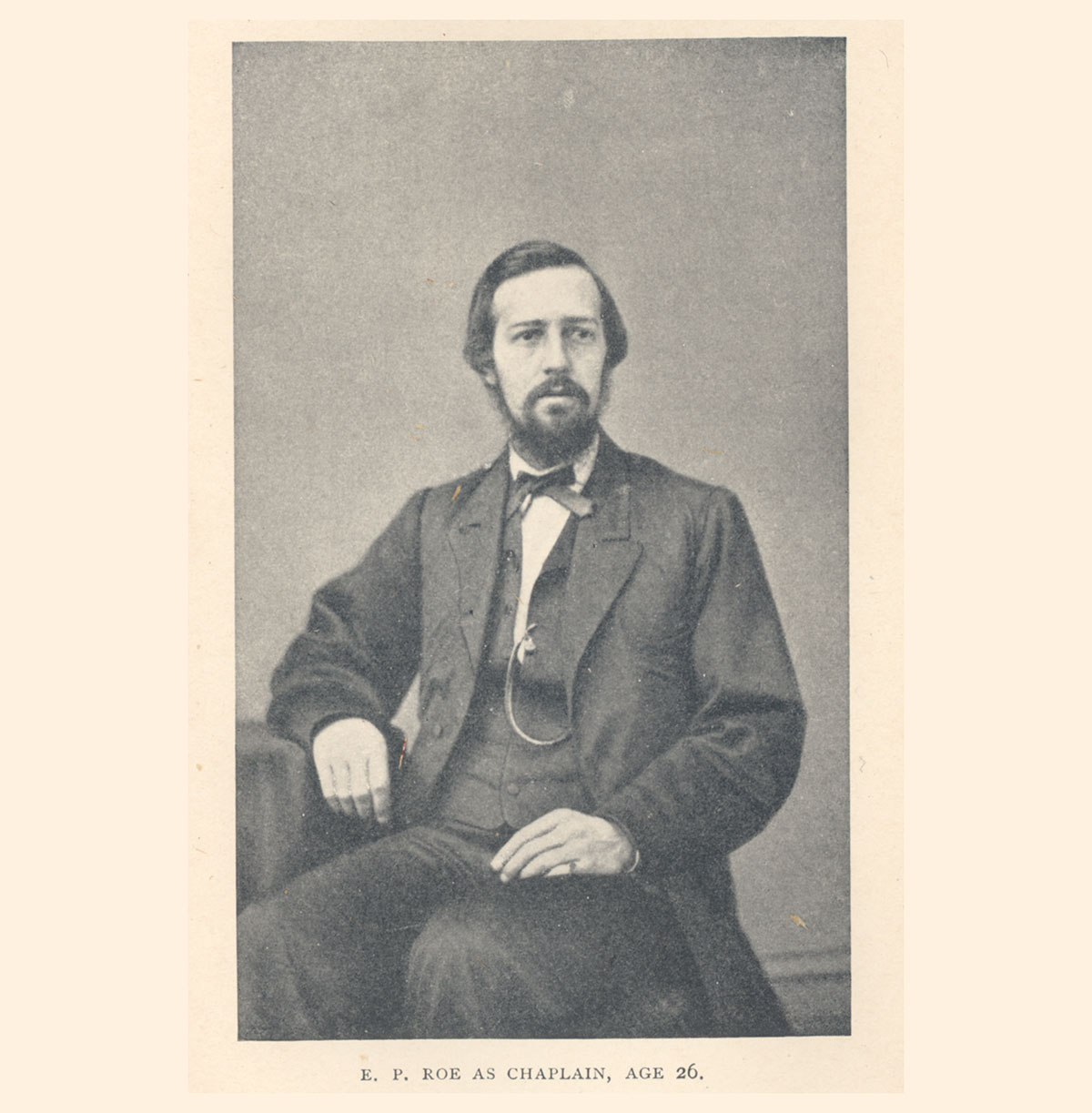 Born in New Lisbon, Ohio, on July 3, 1837, to a Scotch-Irish family known popularly as the “Fighting McCooks,” Henry C. McCook was one of fifteen McCook men to fight for the Union. Following the outbreak of the Civil War, McCook left the Western Theological Seminary in Pittsburgh and headed west that summer. He stopped in Clinton, Illinois, and enlisted as first lieutenant in the 41st Illinois Infantry. Shortly thereafter, he was appointed chaplain of the regiment. After nine months of military service, McCook resigned from the chaplaincy to serve as a volunteer aid on the staff of General John McArthur. Though he intended to take another position in the army, he was convinced by friends that he could serve his country best behind the pulpit. 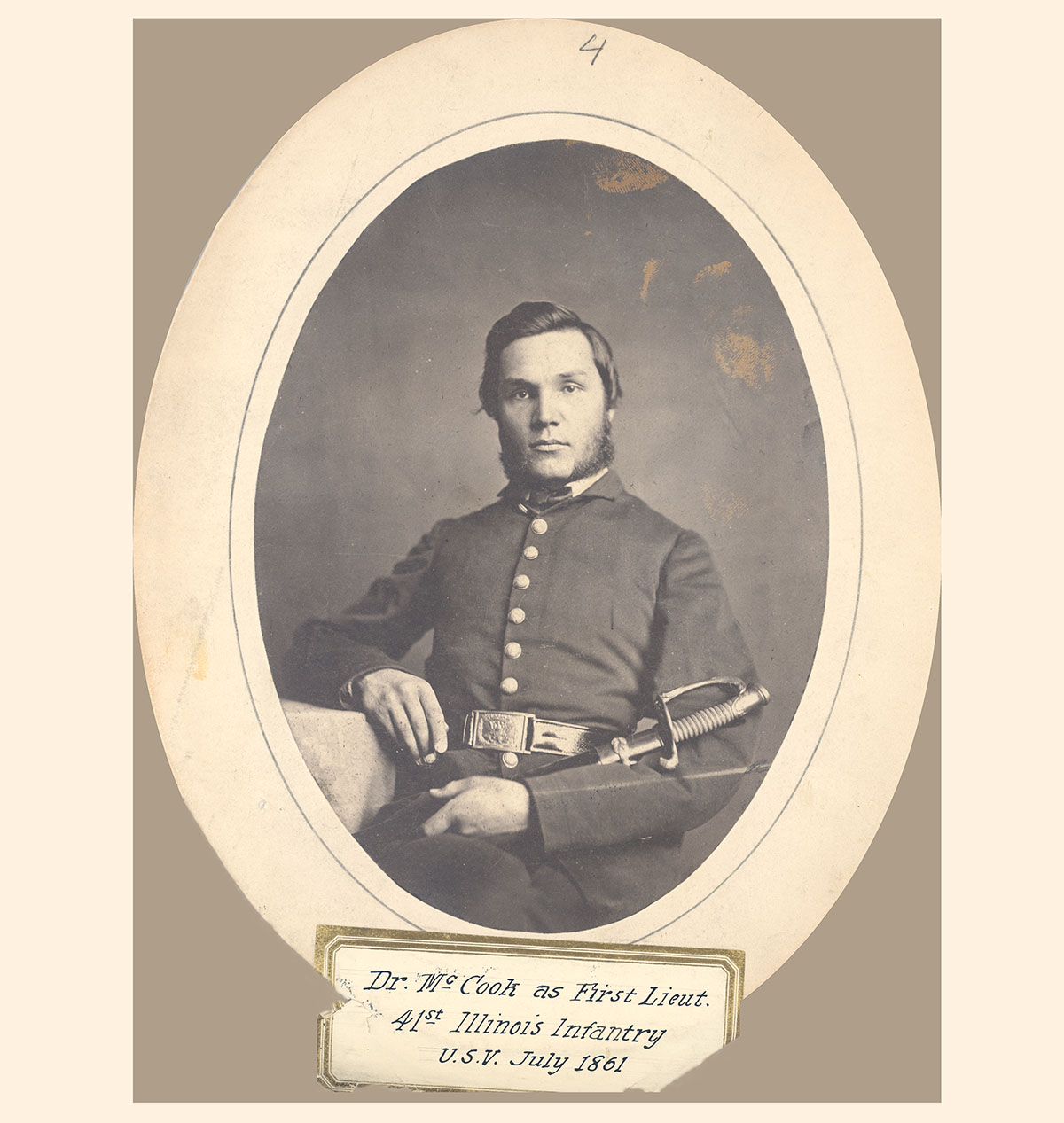 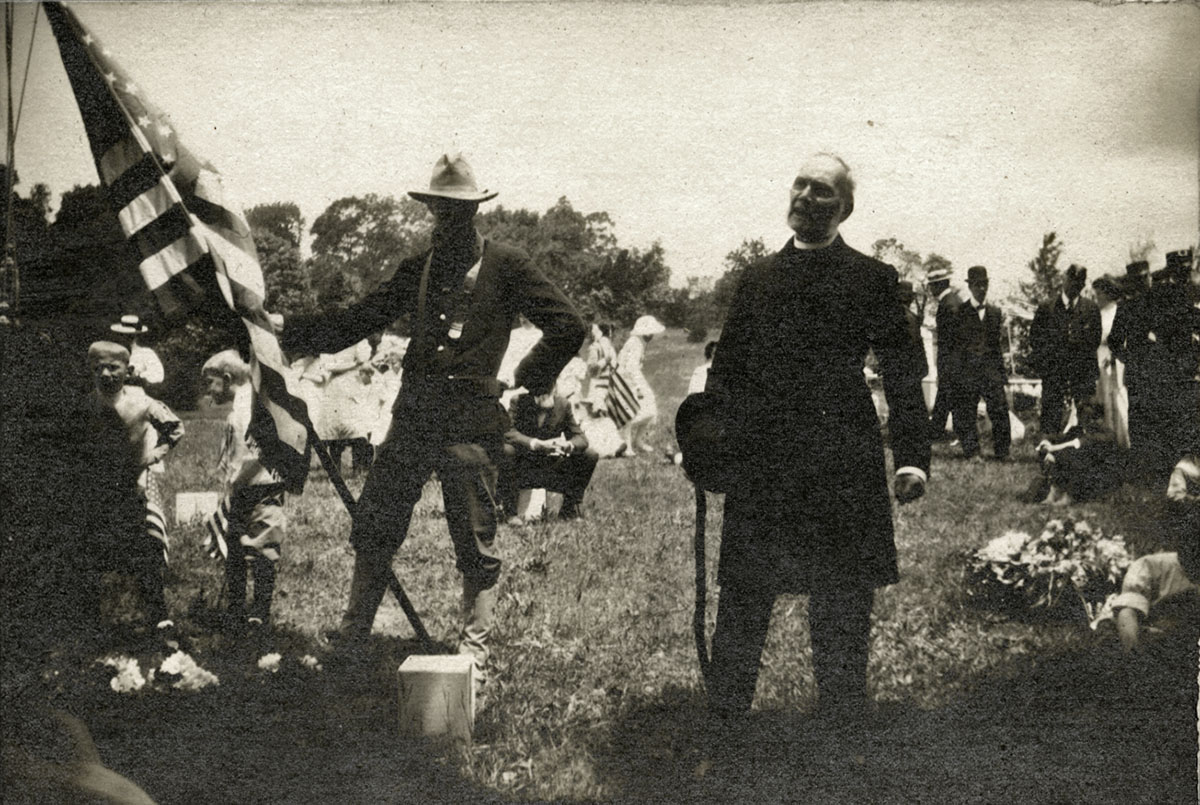 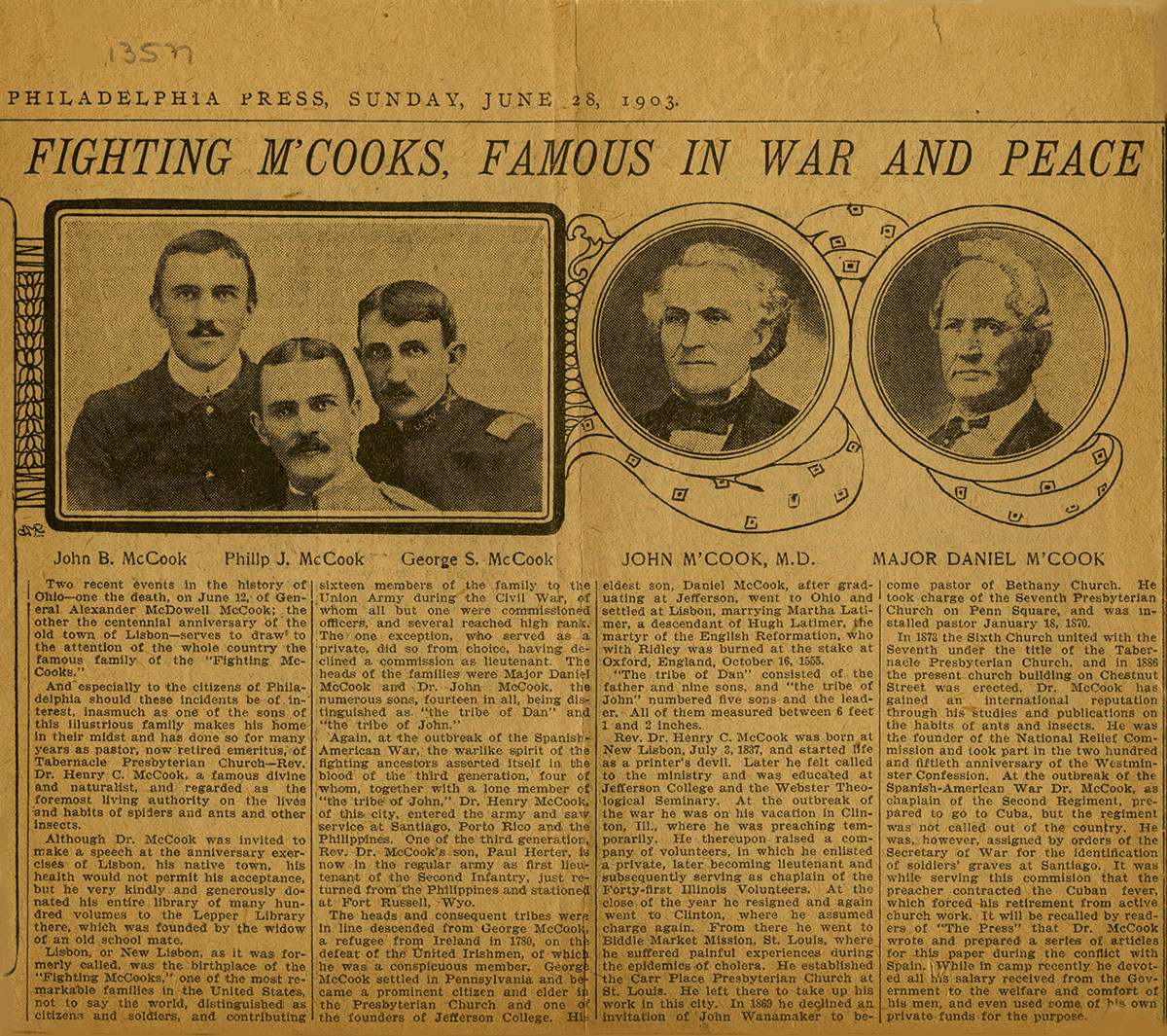 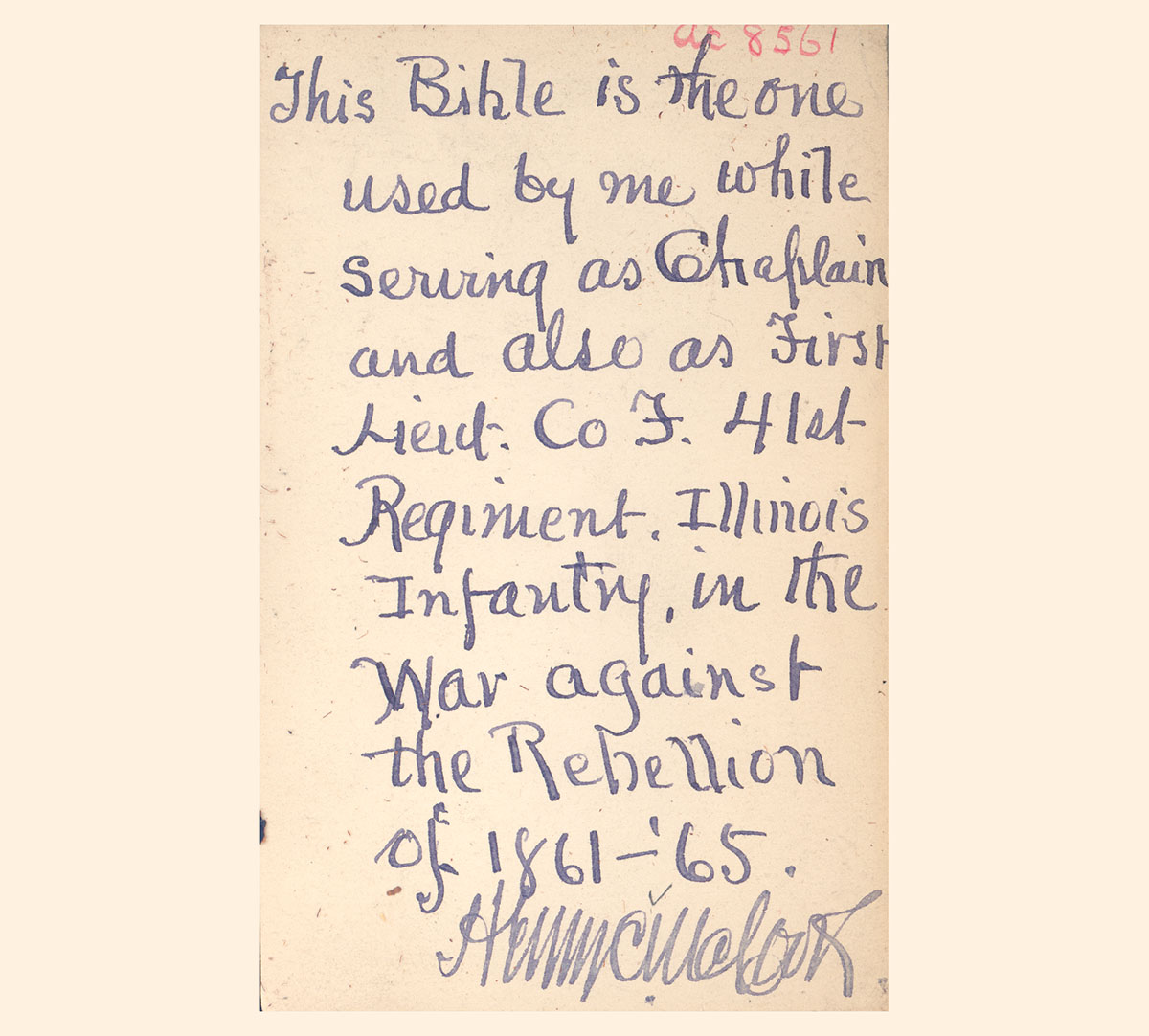 The inside cover of the Bible McCook used while serving as a chaplain in the Civil War contains this handwritten note. (PHS Bible Collection)

Years after his military service, McCook wrote an ode to commemorate the centenary of Abraham Lincoln’s birth. He read his ode before the Pennsylvania Commandery of the Loyal Legion on February 3, 1909. 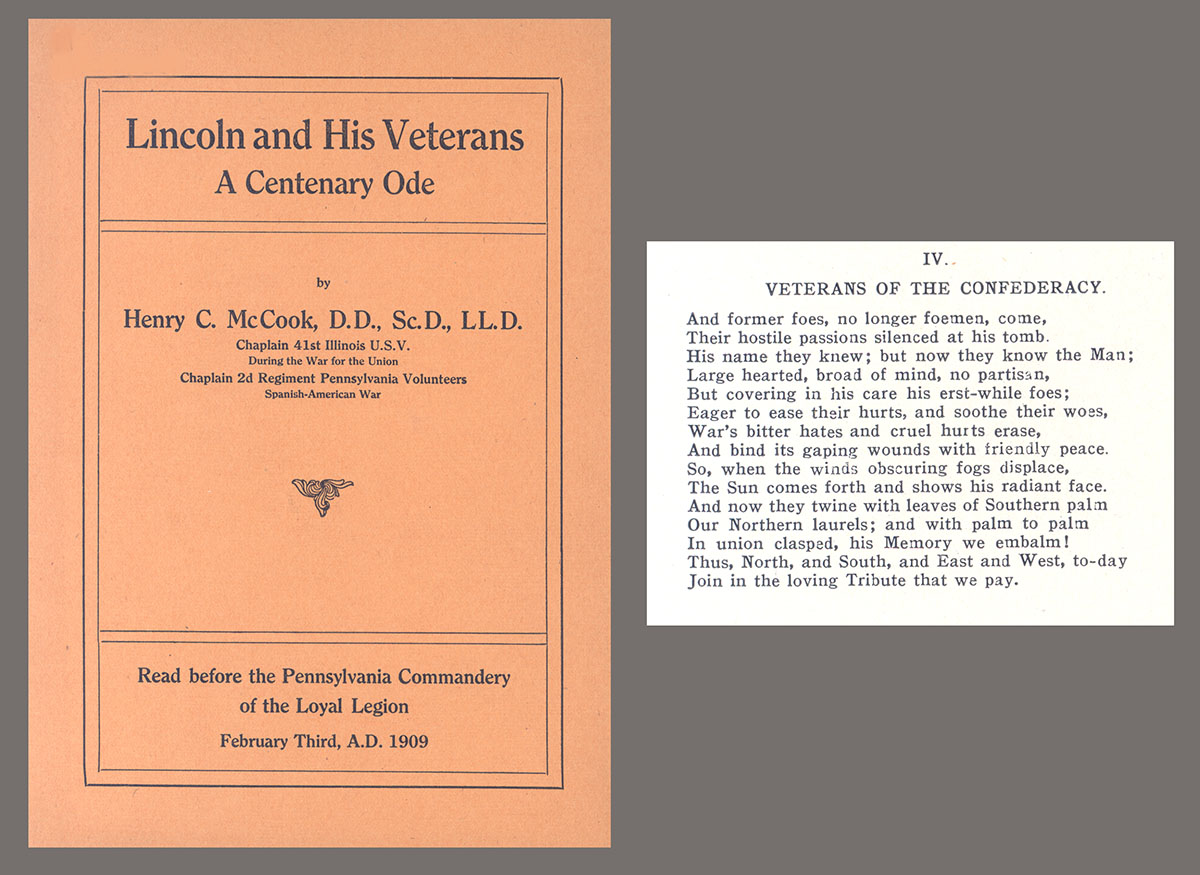 Moses Porter Snell acted as camp assistant to Union General Samuel Crawford during the Richmond–Petersburg Campaign in Virginia. While in camp during October of 1864, Snell kept this journal of biblical studies, written predominantly in short hand. A deeply religious man, Snell was later ordained as a Presbyterian minister in 1887. 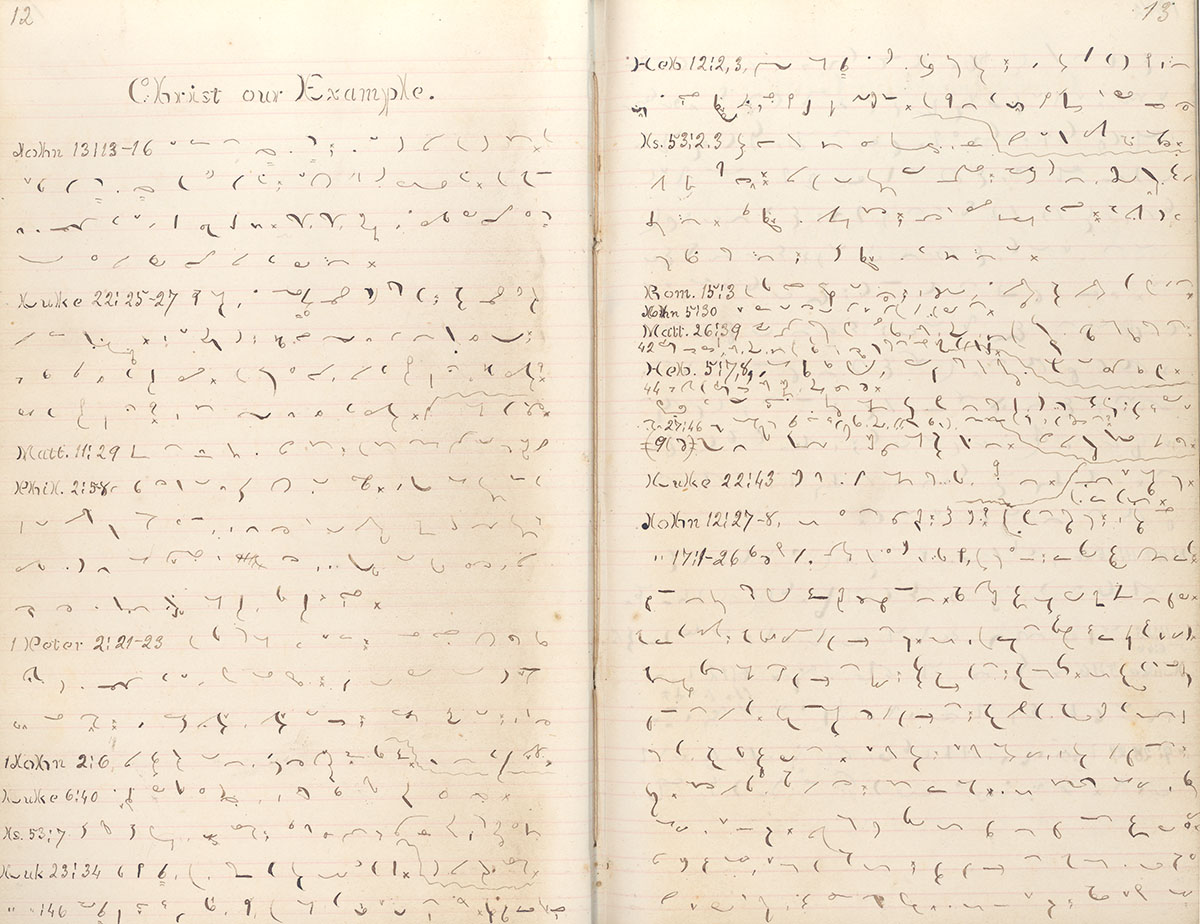 Before beginning work as a volunteer hospital nurse, Margaret worked at home packing supplies for soldiers and writing letters and articles, such as “A Word about the War” for the Princeton Standard, in an effort to bring to light the pressing needs of soldiers and call upon what she saw as the duty of women in war time. 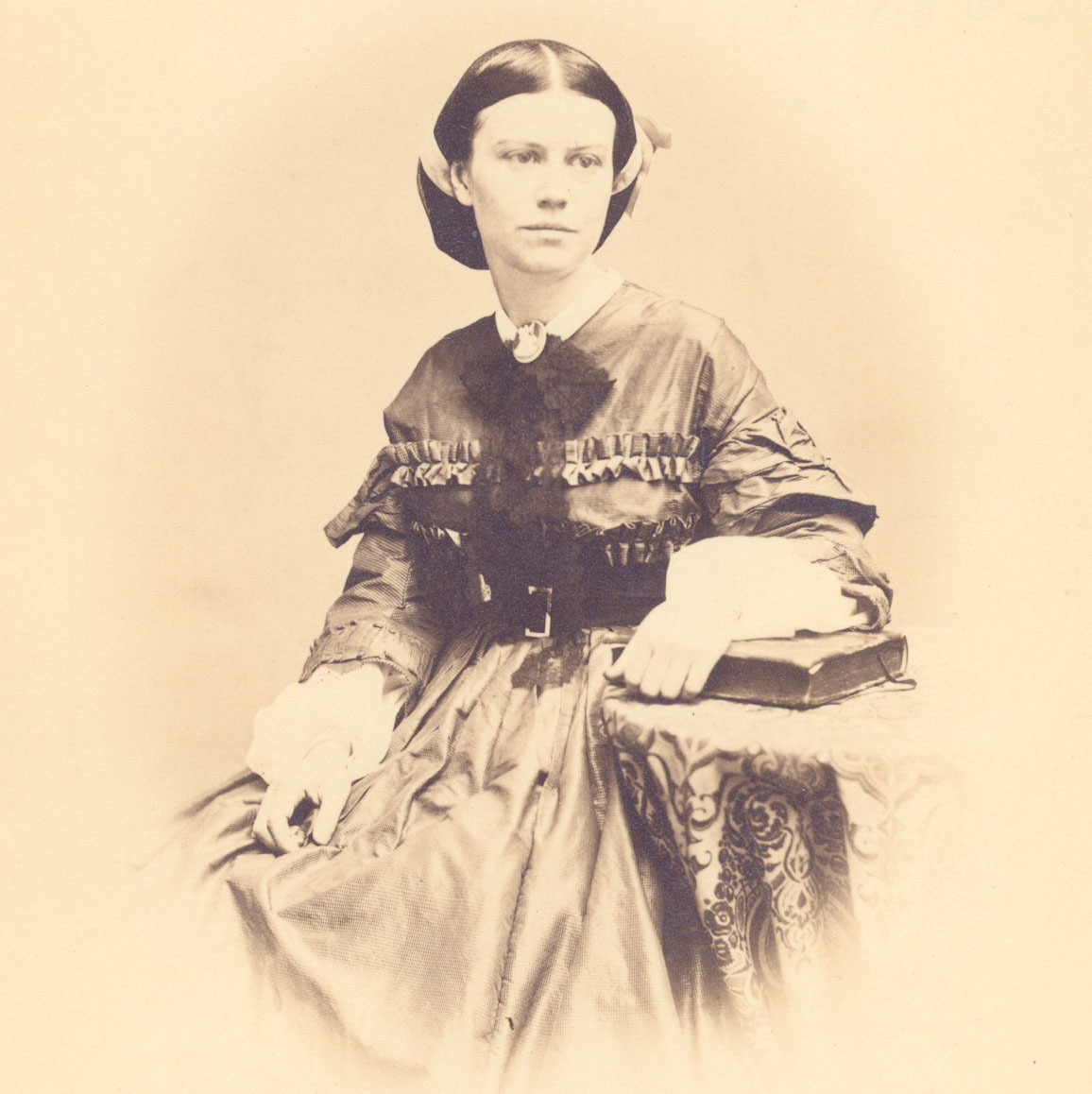 “…Talk as you may of the horrors of this civil conflict that is about to burst upon us, yet when you think of the holy cause for which we fight, when you remember how a nation of loyal hearts, roused from their trusting security, greeted that cause with a whirlwind of loving recognition that shook the land, when you consider who those are that go forth to fight for it, is there not a fitness, a grandeur in it, such as war has never yet known?...” (Memorial of Margaret E. Breckinridge, p. 39.)

Against the wishes of family and friends, she entered hospital service in 1862. Soon after beginning work in Baltimore, Margaret travelled to Lexington, arriving just before the invasion of Gen. Kirby Smith’s army. A few weeks after the Confederate army lost possession of the town, Margaret ventured on to St. Louis, where she worked in the hospitals of Jefferson Barracks. After spending two days in the Barracks, she wrote:

"…I shall never be satisfied till I get right into a hospital, to live till the war is over. If you are constantly with the men, you have hundreds of opportunities and moments of influence in which you can gain their attention and their hearts, and do more good than in any missionary field…” (Memorial of Margaret E. Breckinridge, p. 50.)

From St. Louis she completed two trips on hospital barges, transporting sick and wounded soldiers up and down the Mississippi River, before falling ill several weeks later. Struggling for a year through sickness and exhaustion, Margaret always intended to return to her post on the hospital boats. However, upon hearing that her brother-in-law, Col. Peter A. Porter, had been killed in battle, she rushed to comfort her family, embarking on a trip which proved too strenuous. She died shortly after arriving in Niagara Falls on July 27, 1864.

Samuel Fisher Tenney served in the Confederate army in Virginia and North Carolina. A devout Presbyterian, Tenney was ordained as a minister after the war. His son, Samuel Mills Tenney (1871-1939), founded the Historical Foundation of the Presbyterian and Reformed churches, which served as the archives of the southern stream of the Presbyterian Church in the United States. 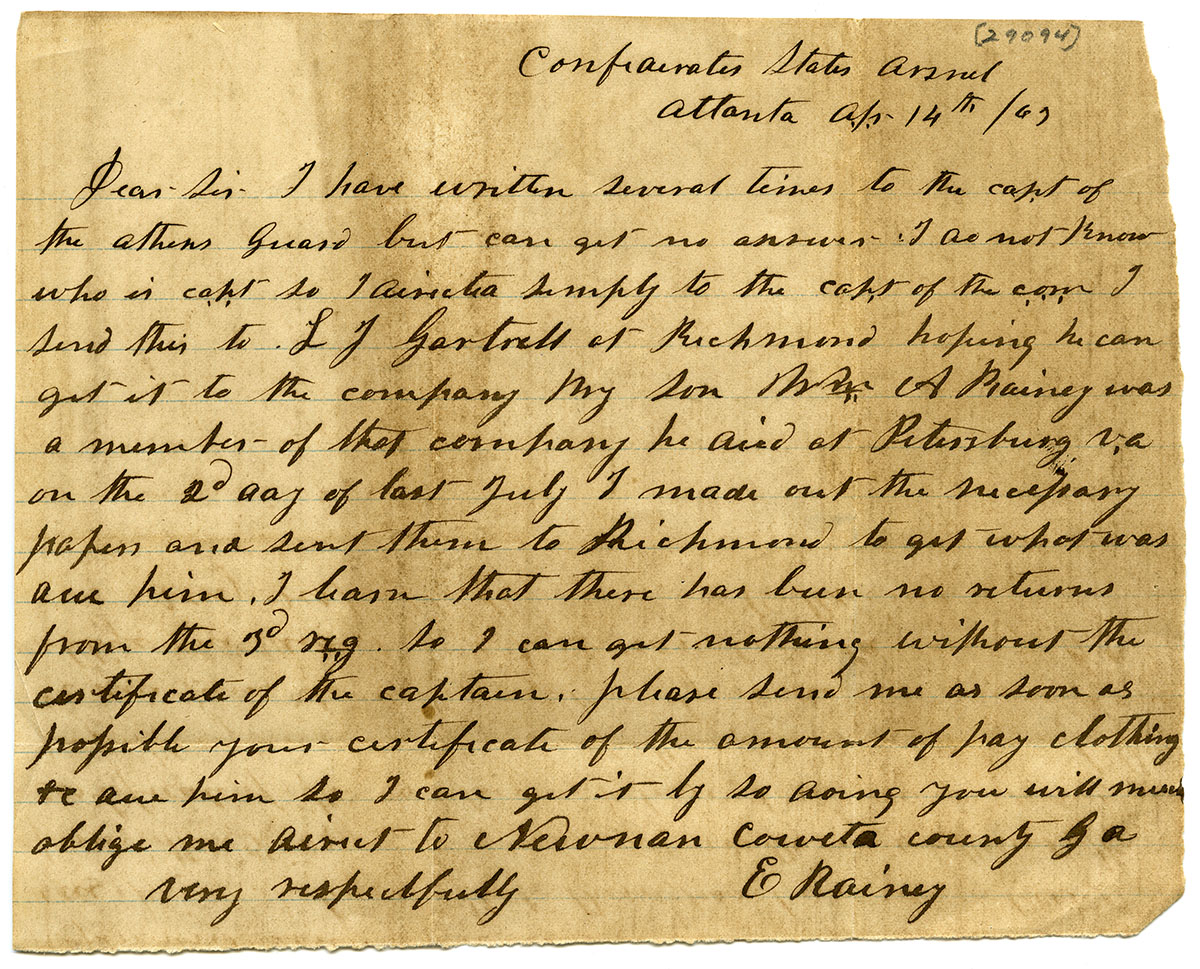 As a boy, Thomas Jonathan “Stonewall” Jackson was known for his gravity and sobriety of manner, and as an adult, for his tenacity and strategic genius. What is less well known is that he was a devout Presbyterian. While living in Lexington, Kentucky in the 1850s, he was seen every Sunday at the First Presbyterian Church. In 1857, he married Mary Morrison, the daughter of a prominent Presbyterian minister, and they had one child. 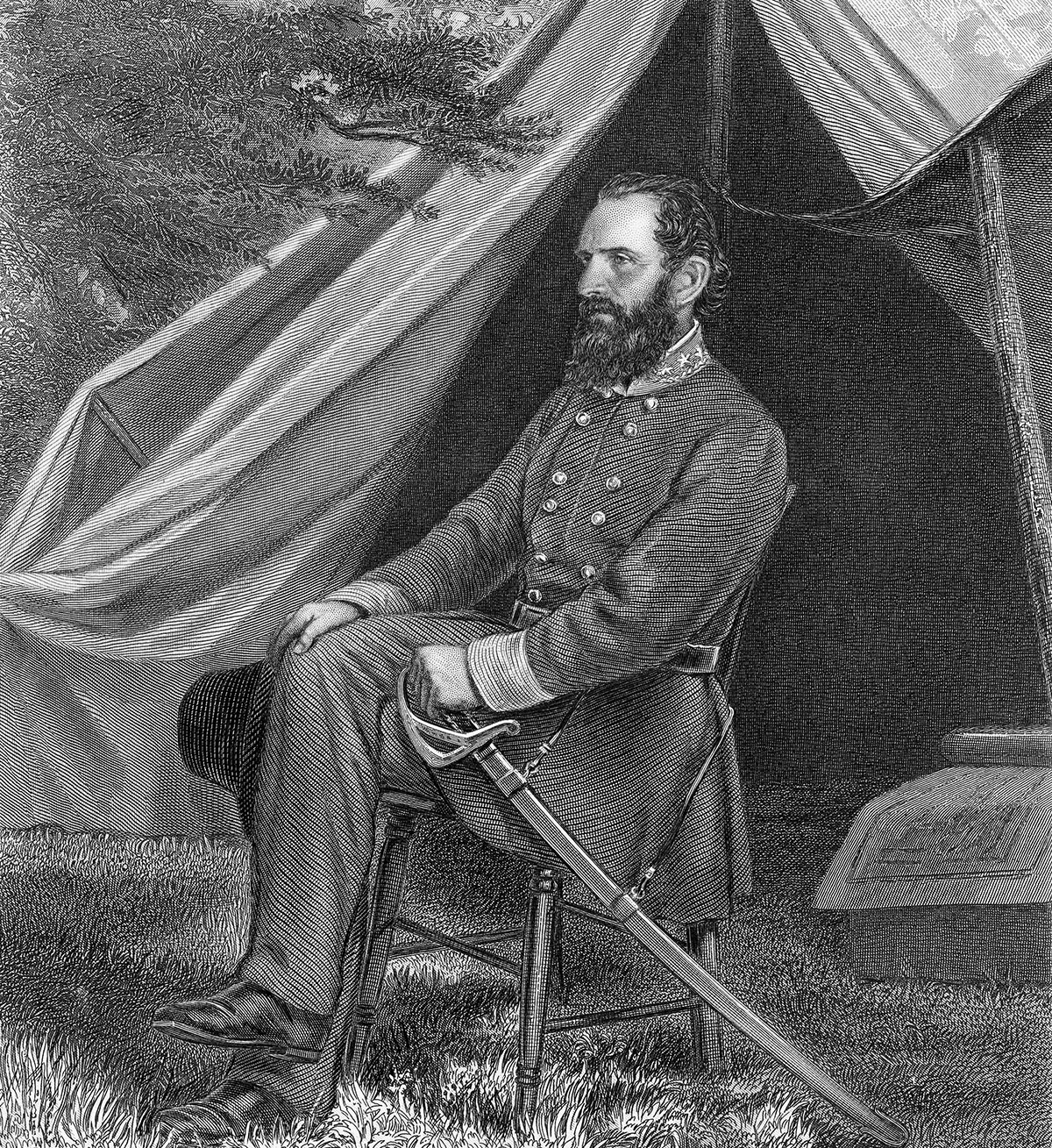 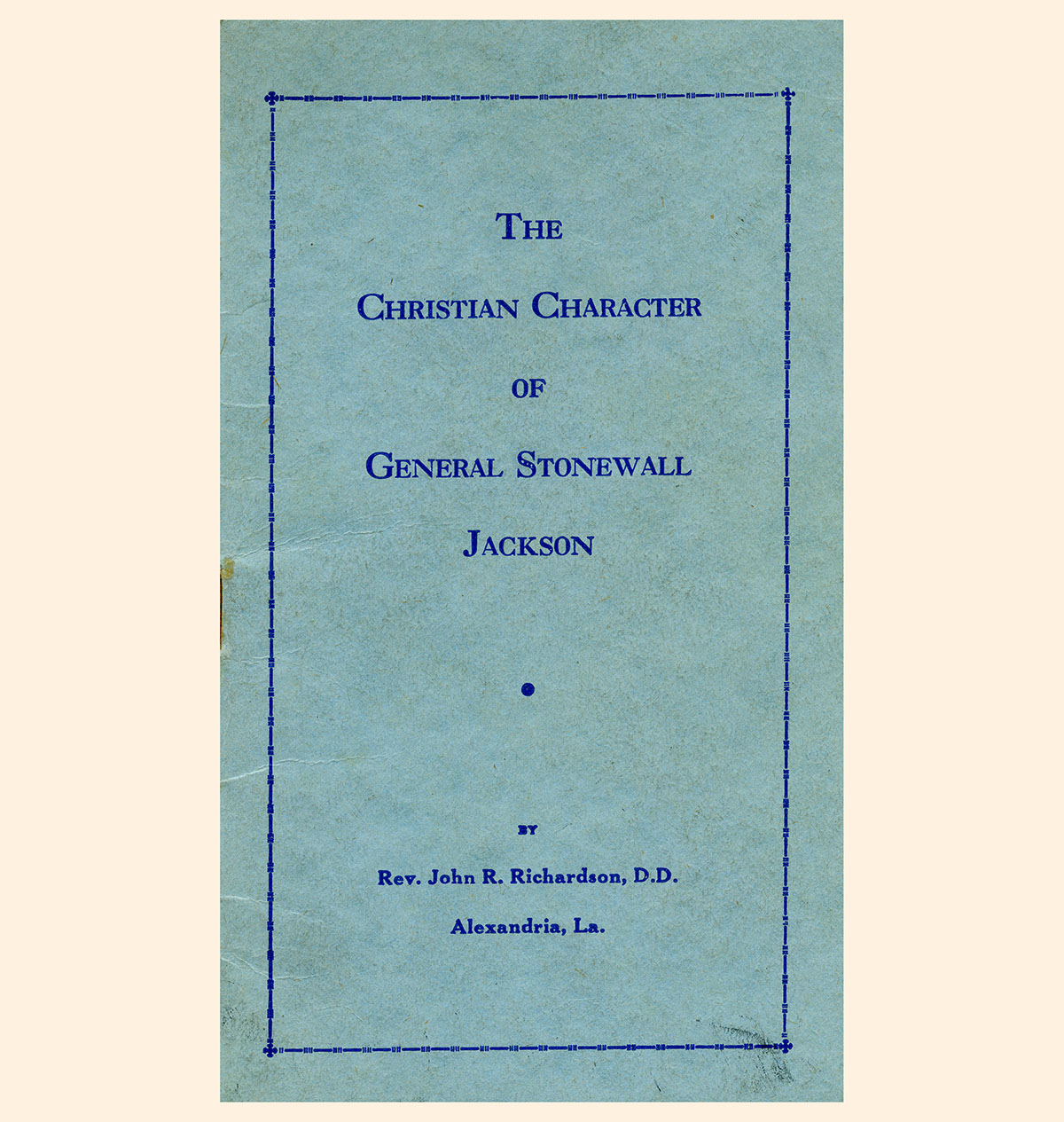