Presbyterian Church in the Confederate States of America

A month after the attack on Fort Sumter, the General Assembly of the Presbyterian Church in the U.S.A. (Old School) convened in Philadelphia. A number of Southern commissioners did attend, inspiring some hope that the denomination would stay united by avoiding “politics.” However, Dr. Gardiner Spring of New York pushed through a resolution of support for the Union cause, and the Southern commissioners withdrew from the Assembly. 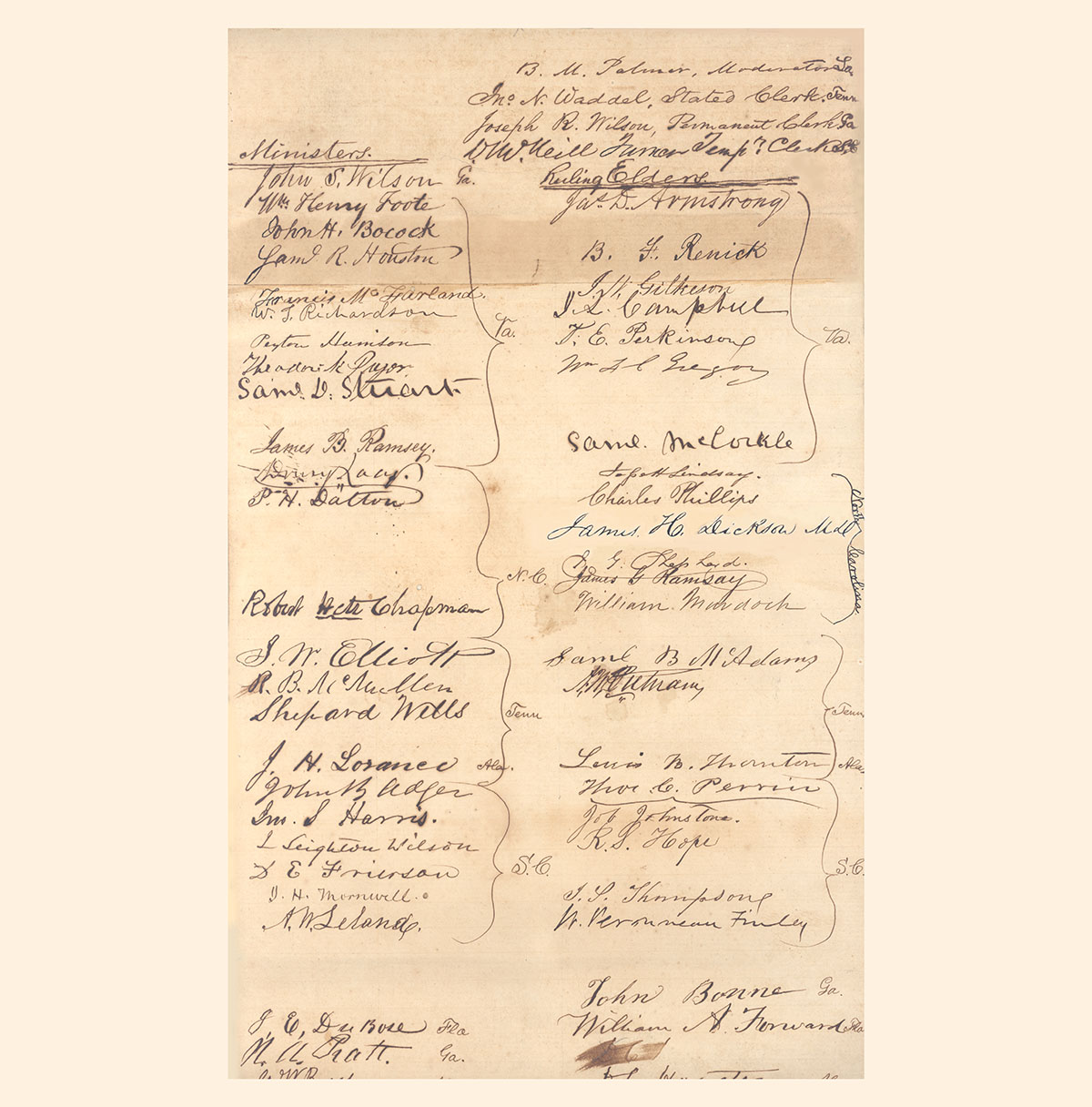 All of the delegates to the first PCCSA General Assembly in 1861 signed the “Address…to all the churches of Jesus Christ throughout the Earth” proclaiming the organization of their new denomination. In the address, the commissioners explained their reasons for leaving the Old School Presbyterian Church and offered a detailed vindication of their pro-slavery stance. (Southern Assembly Collection.)

Delegates from eleven (of forty five) presbyteries in the Confederacy met in Atlanta in August 1861 to urge the formation of a new denomination called the Presbyterian Church in the Confederate States of America (PCCSA). The convention Proceedings included a section “On the War.” 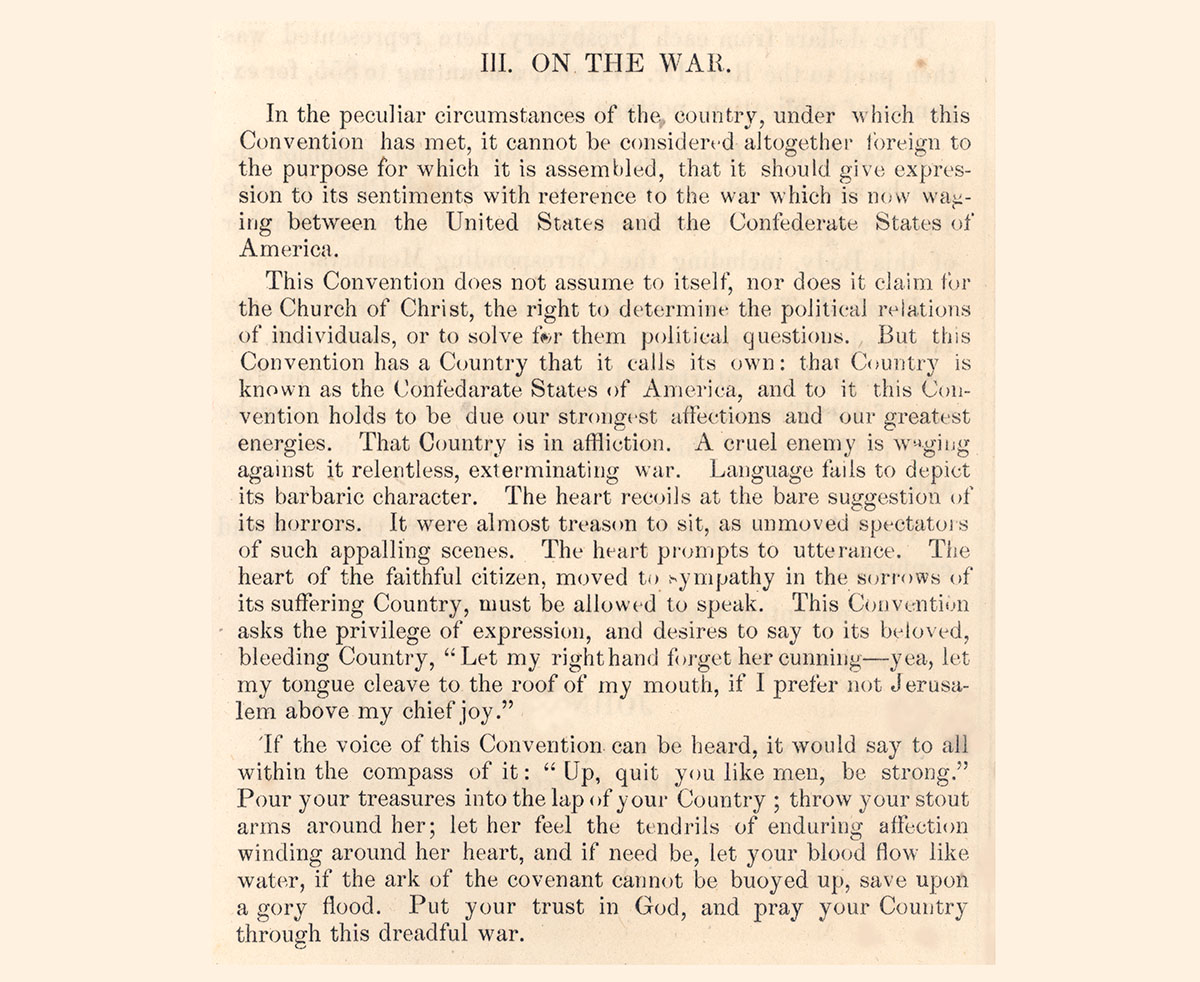 Proceedings of a Convention of Delegates from Various Presbyteries in the Confederate States of America, Held in the First Presbyterian Church, Atlanta, Georgia. (Atlanta: Franklin Printing House, 1861). 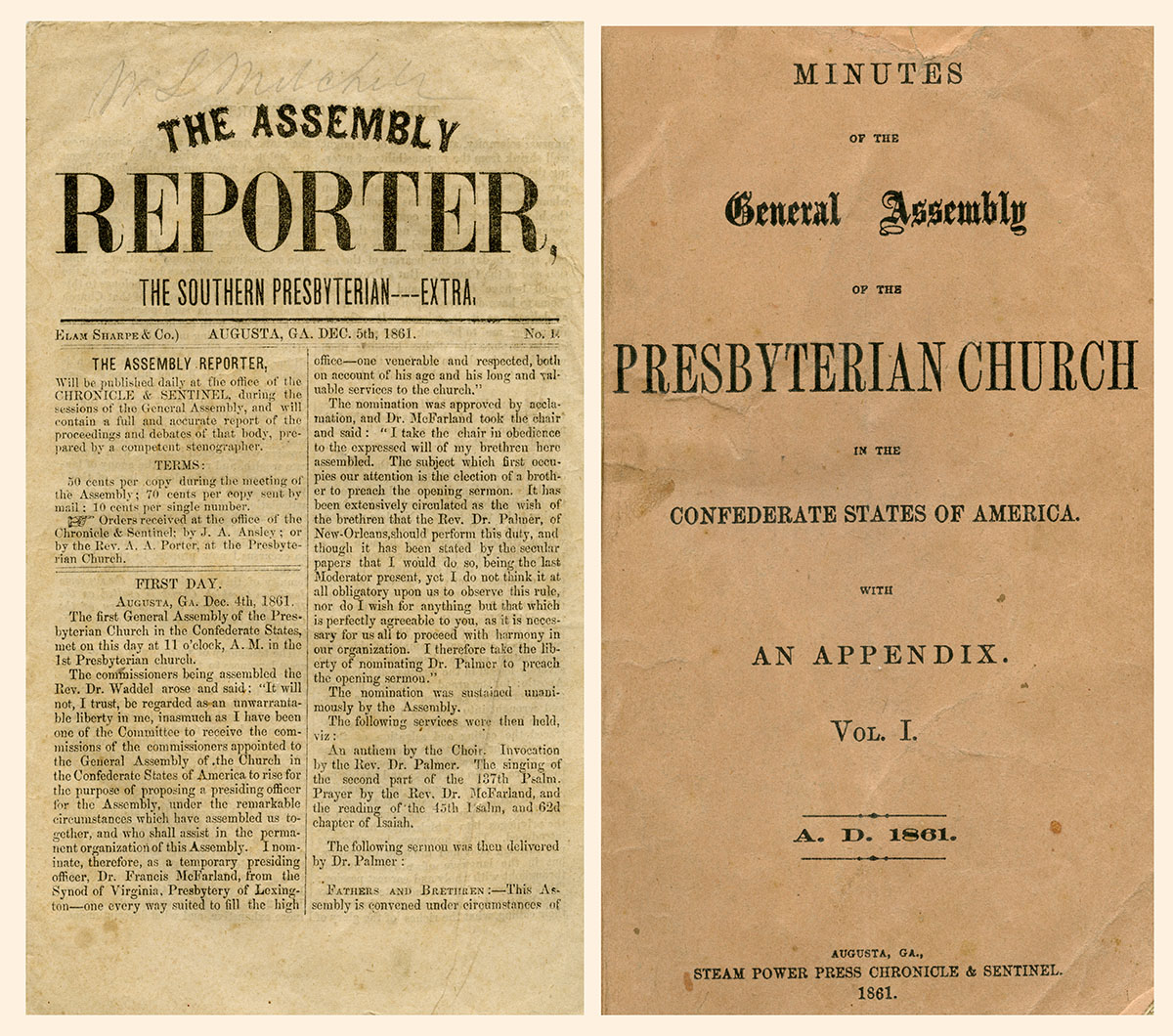 Benjamin Morgan Palmer (1818-1902), pastor of First Presbyterian Church in New Orleans, gave the opening sermon at the first PCCSA General Assembly. As in his famous Thanksgiving sermon of November 1860 that defended slavery and endorsed secession, Palmer relied on theology and rhetorical flourish to embolden the commissioners:

“…Let us take this young nation now struggling into birth, to the Altar of God, and seal its loyalty to Christ, in the faith of that benediction which says ‘blessed is that nation whose God is the Lord.’…May the rushing mighty wind of the Pentecostal day fill this house where we are sitting! and may the tongue of fire rest upon each of this Assembly!...” 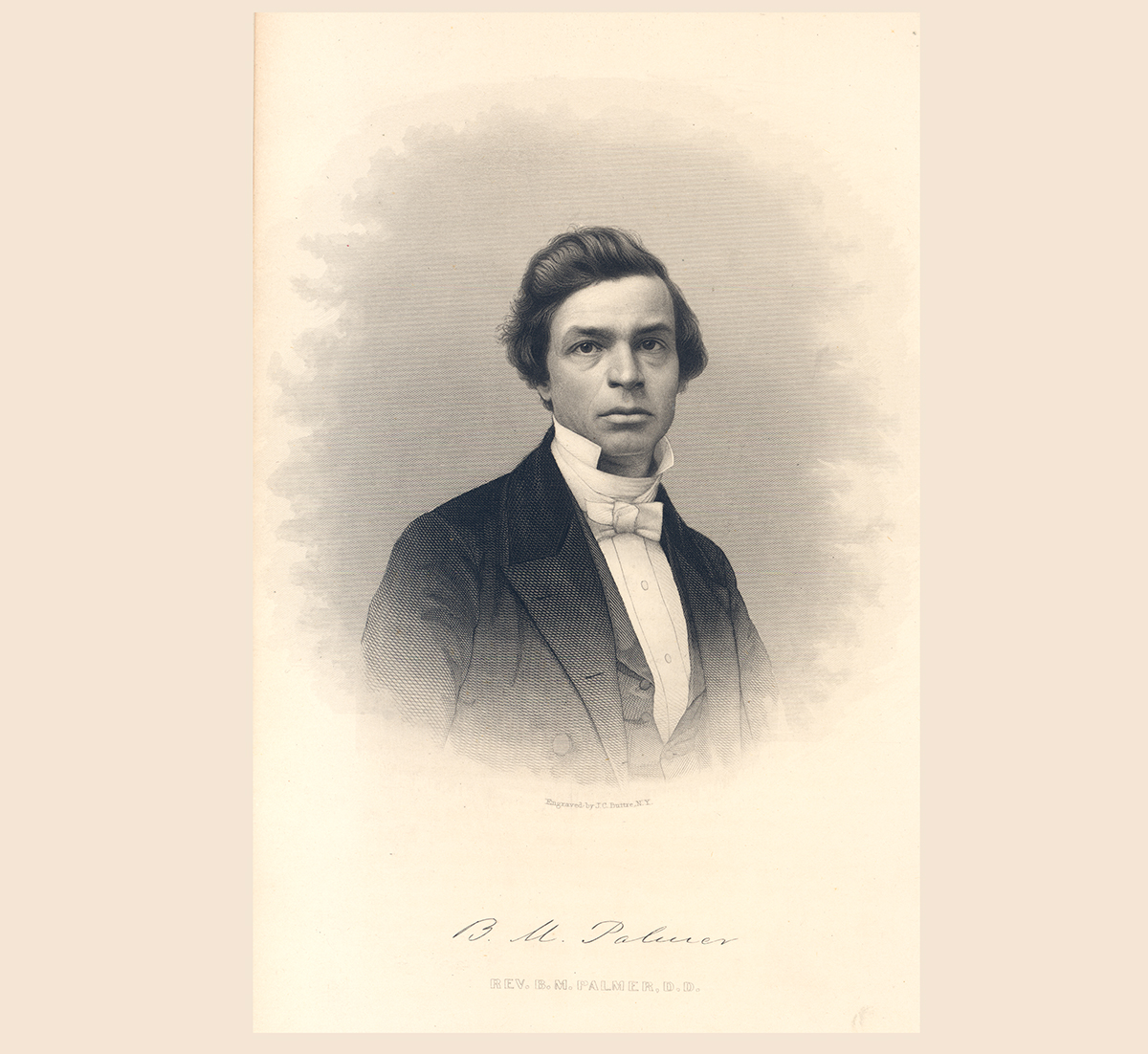 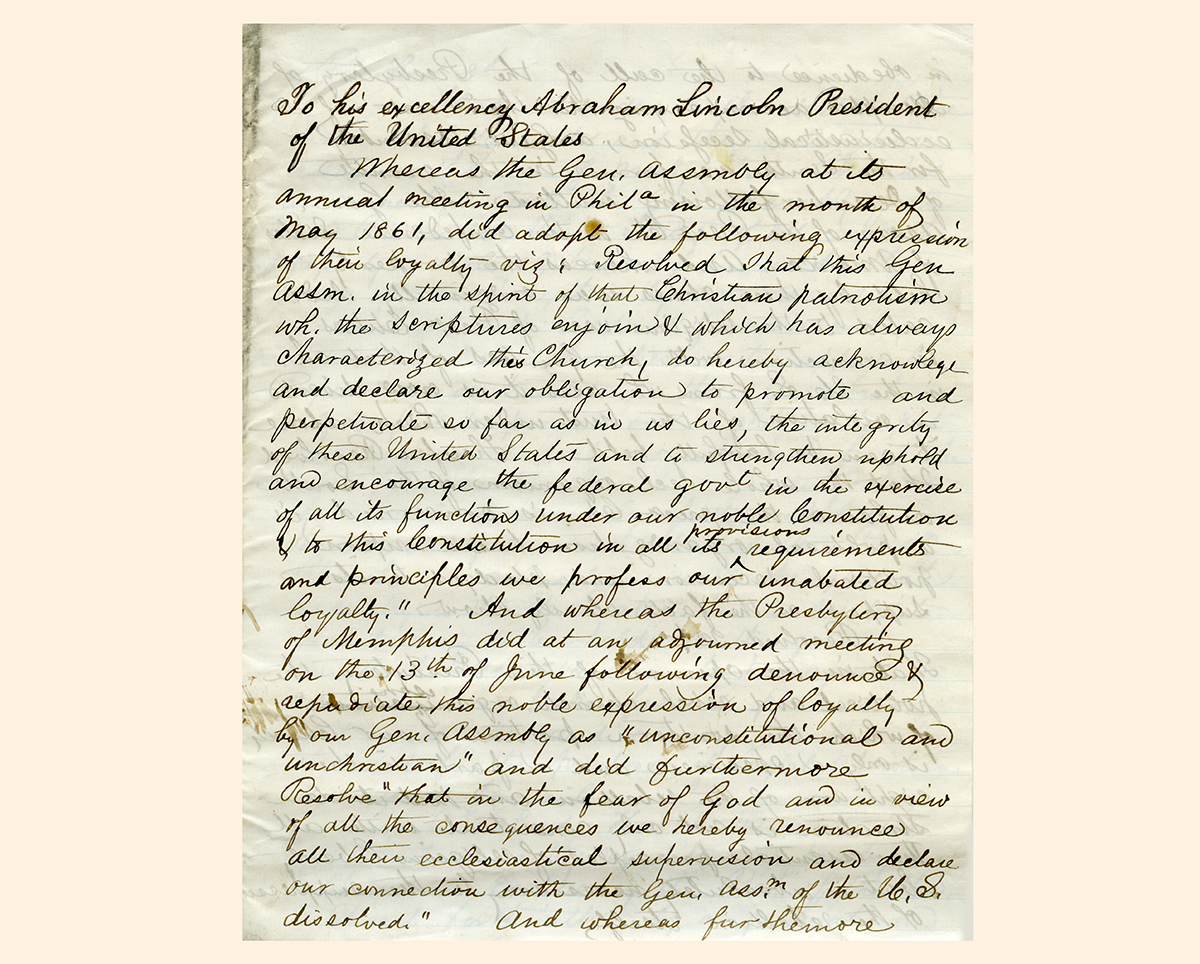