America’s victory in the Revolutionary War benefited the many Presbyterians who supported the Patriot cause. John Witherspoon led the College of New Jersey, later to become Princeton University, until his death in 1794. 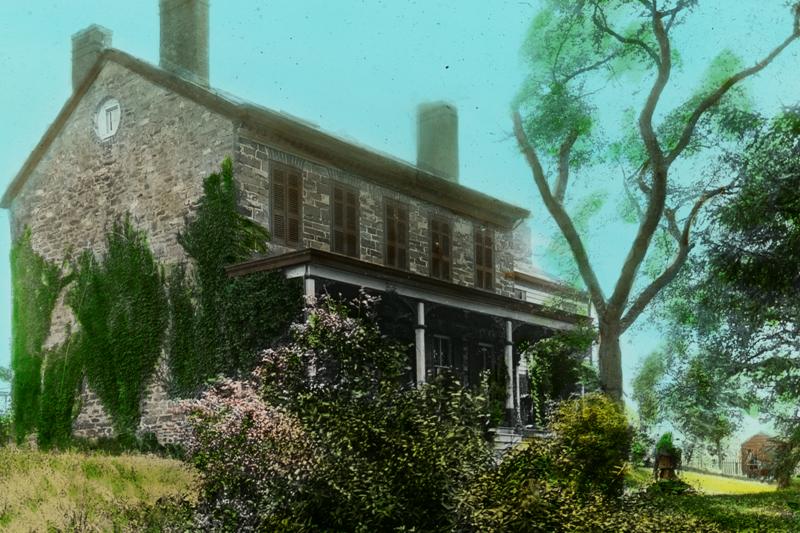 Presbyterians were instrumental in laying down the foundations of higher education in the new nation. Benjamin Rush, one of the signers of the Declaration of Independence, worked with Rev. Dr. John King of Franklin County, Pennsylvania, to help organize Dickinson College, which was chartered in Carlisle, Pennsylvania. It was the first college founded after the formation of the United States, six days after the Treaty of Paris ended the Revolutionary War in September 1783.

New Presbyterian schools such as Centre College in Kentucky and Davidson College in North Carolina helped to educate Americans as the nation grew. 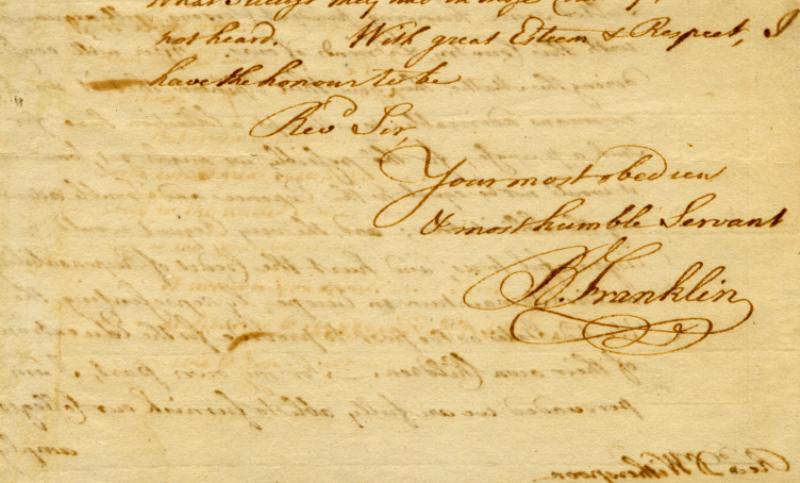 In this letter to John Witherspoon, Benjamin Franklin wrote that he did not expect success in obtaining benefactors for the College of New Jersey--today's Princeton University, April 5, 1784. View entire letter. [islandora:83369] 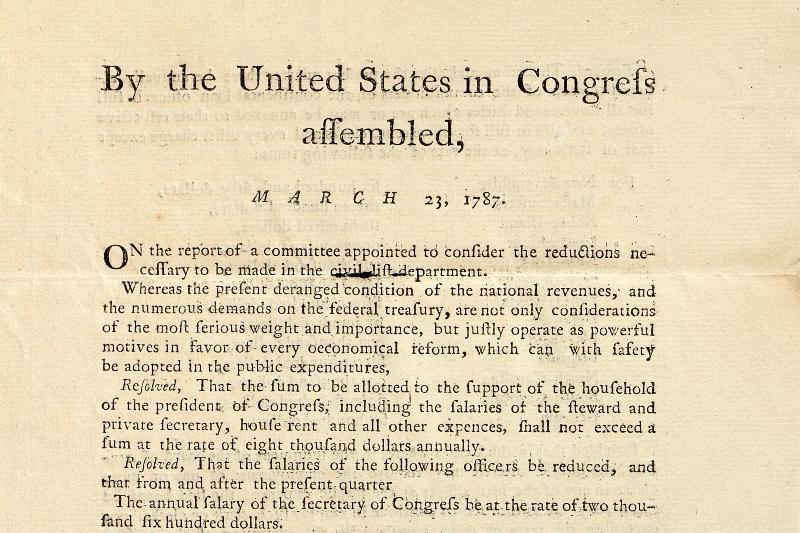 Meanwhile, in the peace following the Revolutionary War, Presbyterians were forming a national church. Presbyterians organized the first General Assembly in the United States in 1789 in Philadelphia. Writing on behalf of the first General Assembly, moderator John Rodgers wrote of the “unfeigned pleasure” the assembly felt at the appointment of George Washington to the “first office” in the nation.

In a 1784 letter to Rodgers, Washington had expressed how he read with “great pleasure” Rodgers' Thanksgiving Sermon, The Divine Goodness Displayed, in the American Revolution. 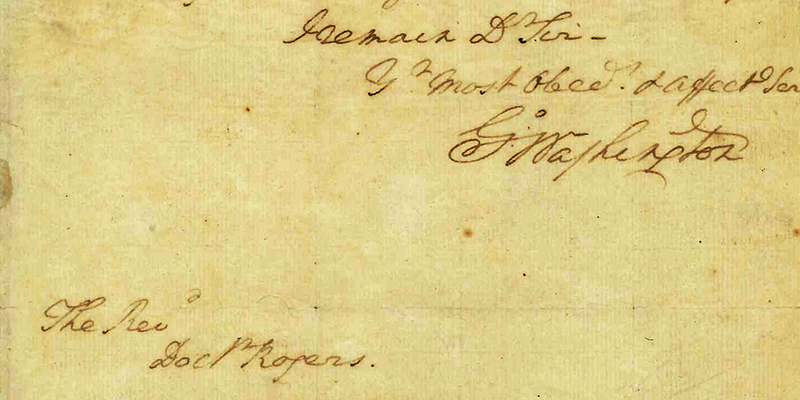 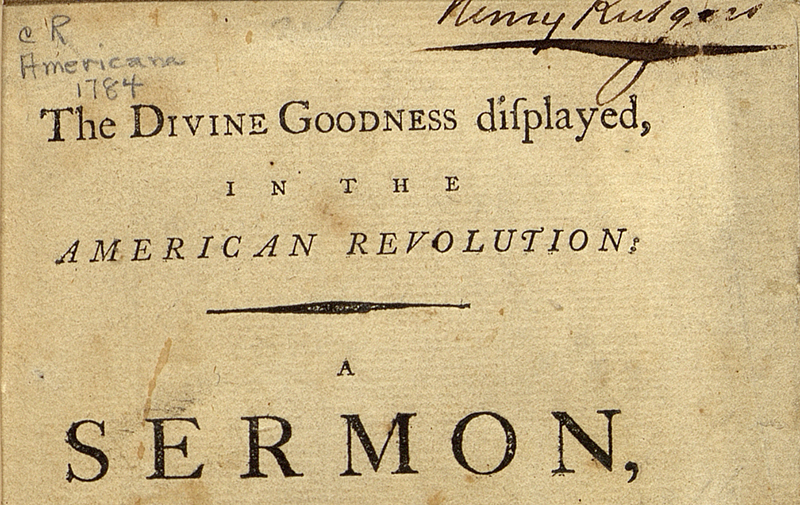 Title page of John Rodger's sermon. Read full sermon. [islandora:75419]
Washington and Rodgers corresponded again five years after the war, an exchange that was published in the newspaper below. Writing on behalf of the first General Assembly in 1789, moderator Rodgers voiced the “unfeigned pleasure” the assembly felt at the appointment of Washington to the “first office” in the nation. In response, Washington cited his “dependence on the assistance of Heaven to support me in my arduous undertakings” and thanked the assembly for its “laudable endeavors to render men sober, honest, and good citizens” as well as “the obedient subjects of a lawful government.” 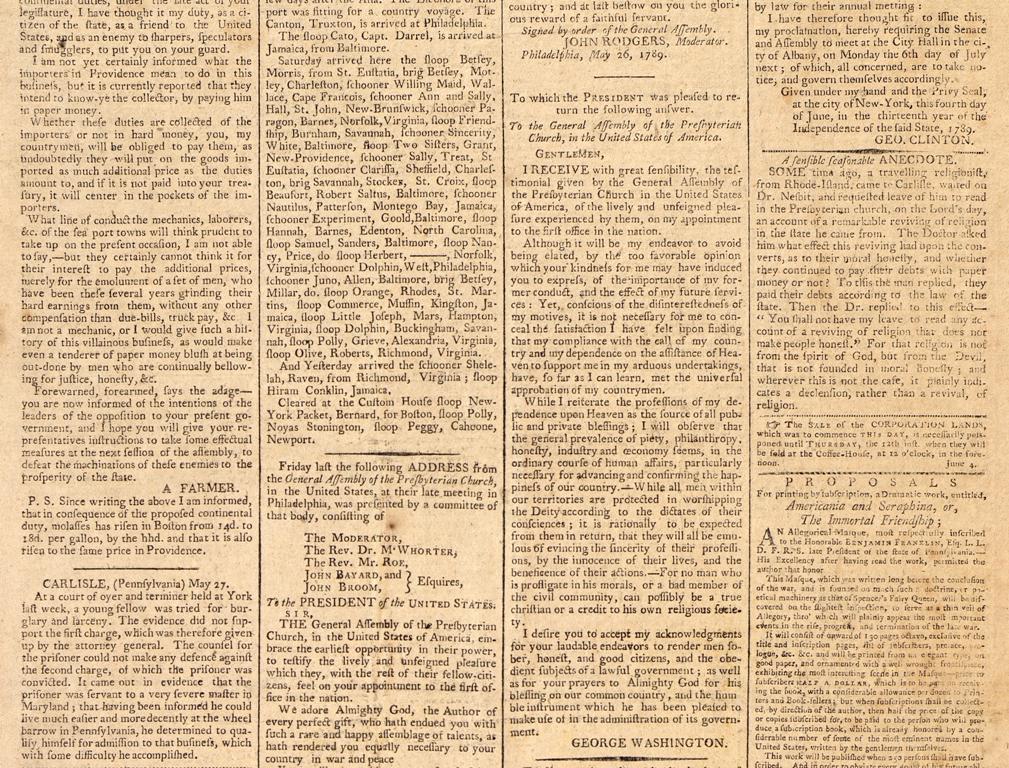 Published letters from the PCUSA General Assembly to President Washington, with Washington’s response. The Daily Advertiser, New York, NY, June 8, 1789. View full image. Item on loan to PHS courtesy of Presbyterian Heritage Center, Montreat, NC.
Exhibit Navigation
Presbyterians and the American Revolution, Page 1
Before: Asserting a Right to Religious Freedom, Page 2
Before: Religious and Political Conflict in the 1760s, Page 3
During: Urging Americans to Arms, Page 4
During: The Fighting Presbyterians, Page 5
During: War Stories, Page 6
During: Difference and Dissent, Page 7
After: Presbyterians Following the War, Page 8
After: Freedom and Equality for All, Page 9
After: Presbyterians Following the War, Page 8
Previous Page
Next Page
Print
New & Noteworthy