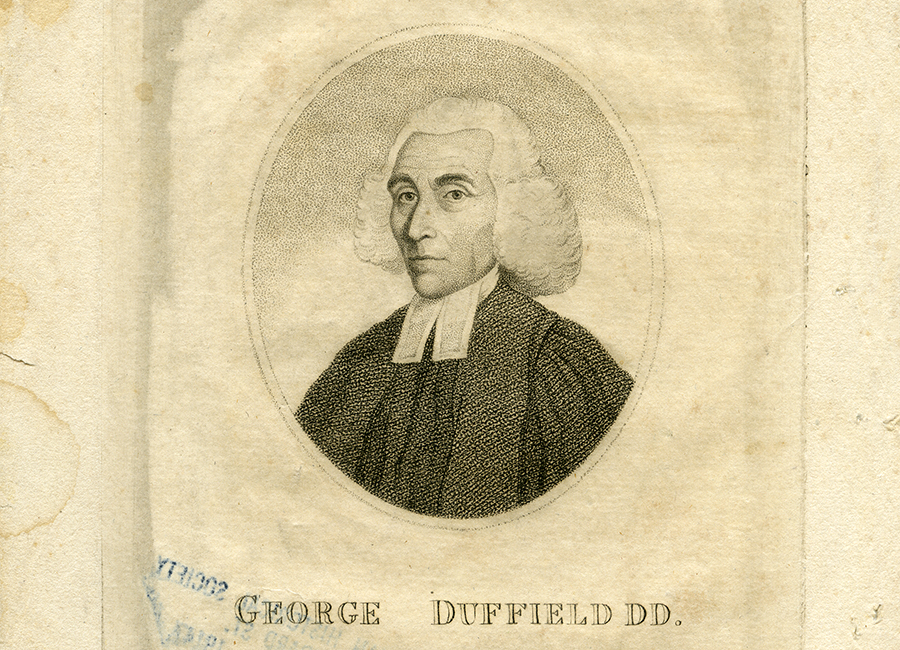 John Rosbrugh (1714-1777), an Irish immigrant and Presbyterian pastor in New Jersey and Pennsylvania, was the first chaplain killed during the war. In 1776, Rosbrugh and members of his congregation organized the third Northampton County, Pennsylvania militia, and Rev. Rosbrugh accepted a commision as their chaplain. The militiamen then joined General George Washington and the Continental Army. During the Second Battle of Trenton in January 1777, Rosbrugh was bayonetted and killed by Hessians.

James Francis Armstrong (1750-1816) studied under John Witherspoon at the College of New Jersey in the years before the war. He was ordained in 1776, and soon began a career as a chaplain that lasted until 1782. In 1779, he preached a sermon to George Washington’s troops at the Middlebrook encampment near Bridgewater, New Jersey. The manuscript copy of the sermon still exists in the collection of the First Presbyterian Church in Trenton, New Jersey. 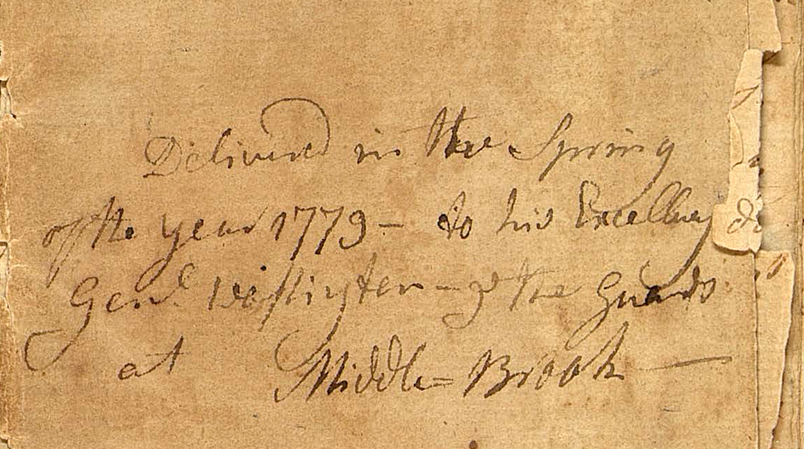 Other Presbyterian chaplains and officers gave their lives to the Patriot effort. James Caldwell (1734-1781), pastor of the Presbyterian Church in Elizabethtown, New Jersey, earned the moniker the “fighting parson” for his commitment to the rebel cause. Like Duffield and Armstrong, he served as a chaplain, in this case to the Continental Army. During the June 1780 Battle of Springfield, Caldwell exhorted American troops to use pages from copies of Isaac Watts’ Hymnal as gun wadding. Legend has it that Caldwell told the troops, “Give ‘em Watts, boys!” or “Put Watts in them, boys!”—a scene vividly rendered in Henry Alexander Ogden’s watercolor, “James Caldwell at the Battle of Springfield.” 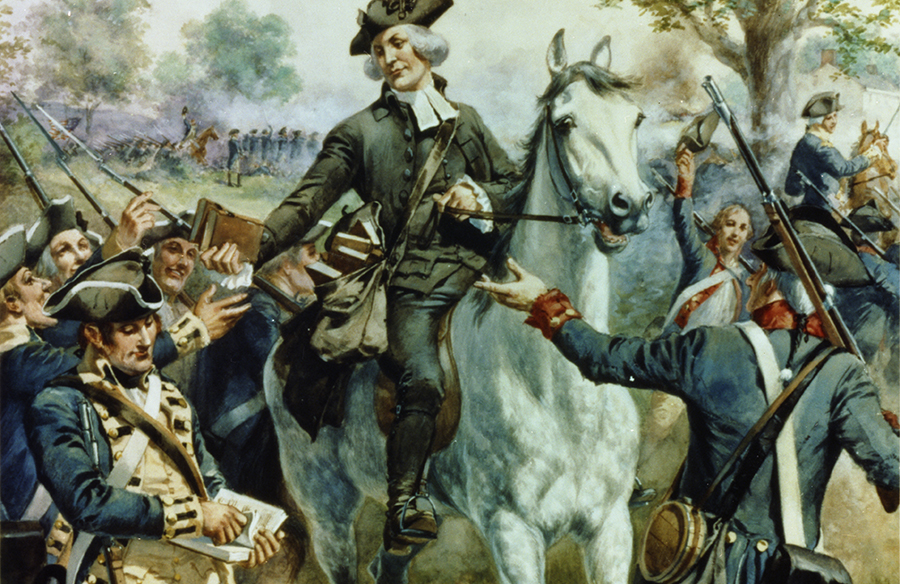 After the Battle of Springfield, British forces burned down the First Presbyterian Church of Springfield, New Jersey, and the surrounding village. Later that month, Caldwell’s wife Hannah was shot and killed after the Battle of Connecticut Farms in Union Township, New Jersey. Reverend Caldwell died in November 1781, also on the fringes of battle, when an American sentry shot him—reportedly for refusing to allow the search of a package he was carrying.

Portion of a roof shingle from the church rebuilt after the war, 1791. Item on loan to PHS courtesy of First Presbyterian Church, Springfield, NJ. View full image.

Another Presbyterian martyr was Hugh Mercer, a Scottish-born physician who became an officer in the Continental Army in 1776. Instrumental in General Washington’s victories in Trenton in December 1776, Mercer was leading a group of Washington’s soldiers to Princeton in early January 1777 when his brigade encountered British troops. Mercer was mistaken for George Washington and ordered to surrender; though he fought for his life, he was killed by British soldiers. 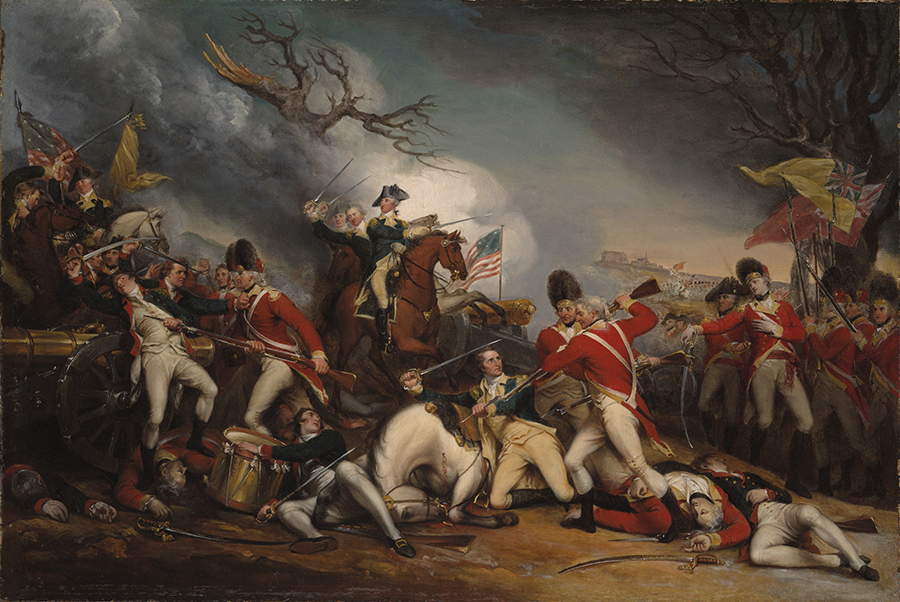 The Death of General Mercer at the Battle of Princeton, January 3, 1777. John Trumbull, oil on canvas, circa 1787–circa 1831. Courtesy of Yale University Art Gallery.

The Tomb of the Unknown Soldier at the Old Presbyterian Meeting House in Alexandria, Virginia, serves as a poignant memorial to the war’s many dead. The permanent tombstone dates to 1929, when Alexandria's American Legion Post 24 led a nationwide effort to erect the permanent tribute. 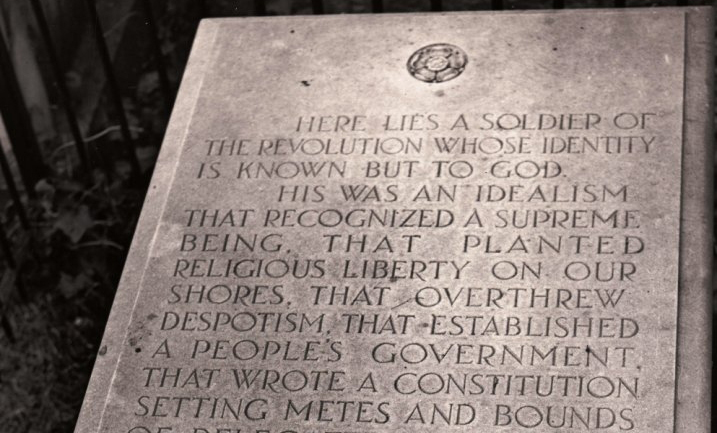 Tomb of the Unknown Soldier of the American Revolution, circa 2014. Churchyard Burial Ground of the Old Presbyterian Meeting House, Alexandria, VA. Photo courtesy of Old Presbyterian Meeting House. View full size.
Exhibit Navigation
Presbyterians and the American Revolution, Page 1
Before: Asserting a Right to Religious Freedom, Page 2
Before: Religious and Political Conflict in the 1760s, Page 3
During: Urging Americans to Arms, Page 4
During: The Fighting Presbyterians, Page 5
During: War Stories, Page 6
During: Difference and Dissent, Page 7
After: Presbyterians Following the War, Page 8
After: Freedom and Equality for All, Page 9
During: The Fighting Presbyterians, Page 5
Previous Page
Next Page
Print
New & Noteworthy